Why Poetry is Free 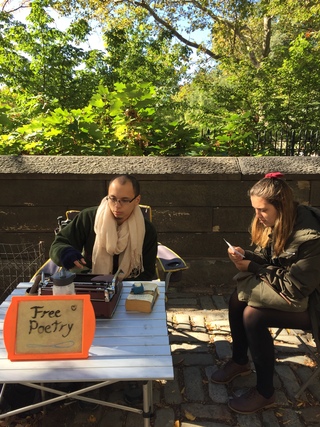 Photo of Alexis Manzano and Ana Pearson by Carol Bergman
Alexis Manzano has no internet footprint, no day job he’ll admit to, and no ambition other than writing poetry and living and working in the presence of poets and travelers. A traveler is anyone who passes his makeshift office at the edge of the park between 84th and 85th and Fifth Avenue on the sunny autumn day I found him. The location may change, but Alexis’ vocation does not. He works intently. He does not ask for money, only donation. Money and donation are not the same. Poetry is free, as the sign says.

A small young man with a cherubic face, Alexis composes his poems on a brown Olympia typewriter set gingerly on a folding table. A sign “Free Poetry” is propped in front of the typewriter; he sits with his back to the playground facing the cobbled sidewalk. He has a gossamer shawl regally tosssed around his shoulders to protect him from the light wind. He resembles a scribe or seer from antiquity.

I watched with curiosity as Ana Pearson settled into the visitor’s chair. Ana, from Argentina, is studying to be a translator so, by definition, she is interested in words. She presented her prompt: home. Alexis got to work. When he was finished, the poem covered two very small pieces of paper which Alexis clipped together. Here is his free mattress poem:

number of sidewalks/i’ve strolled past/exceeds all my gloved fingers
all the still trees/overarching silence/and what daydreams/have dissolved or popped over time
and judging by the life/span of this purple land
many thousands of brains/have explored these sidewalks
and surprised/that I haven’t collapsed/upon the concreted covered/by jagged shadows
i further the soft soles/up down/until
i forget what a mattress under ceilings felt like.

“Alexis, why haven’t you signed the poem?” I asked.

“Because I want the person to forget all this,” he said gesturing to the table, to the typewriter, to the air. “All that matters is the poem. Here is the poem.”

He handed it to Ana who seemed pleased to have such a personalized poem written to her prompt. It would be a souvenir of her sojourn in New York.

I have had some email exchange with Alexis since that day. When I mentioned that I taught at NYU he asked if there was any chance he could audit a poetry class. He’d been a student in the Creative Writing Program at Hunter, his father had gone to NYU, he had grown up in Harlem. Had he completed the program at Hunter, I wondered. He wouldn’t say. So many young people have to drop out of school for economic reasons these days. An NYU audit does not seem likely though he could attend readings, I told him. I then steered him to City Lore on the Lower East Side. Its founder, Steve Zeitlin, a reknowned folklorist and daily early morning poet, has just written a book called “The Poetry of Everyday Life,” which I know Alexis would enjoy.

Great to see this free-spirited poet get the attention he deserves! Steve