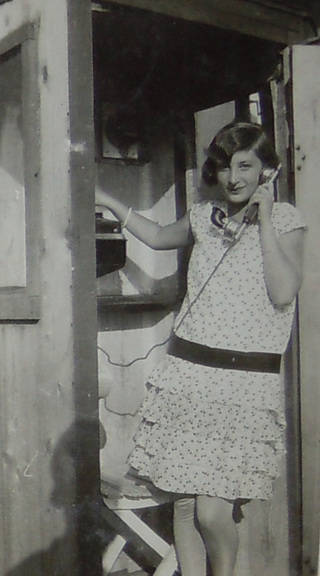 My mother, Gerda, as a young woman in Vienna. She arrived in America as a refugee.
She died at 99 holding a book. Not literally so, but metaphorically speaking, she was a free-thinking person of the book and interested in all books, all people, all of life, everywhere. She was difficult, opinionated, even prejudiced occasionally, but she usually returned to knowledge and tolerance. She was an enlightened, educated, emancipated, complicated woman.

She was fully conscious to the end, thinking about and verbalizing her experience. She lay in her hospice bed, her family around her, observing her own death, talking about it to us and to herself in an inward reflection. “I’m dying,” she said. She instructed the nurses to give her more morphine, or less. We played her music, put buds in her ears, read poetry to her. She wanted to wait for one of her grand-children to arrive from Wyoming, she said, clearly. As a physician, she understood the power and solace of morphine, how it could be used to control one’s last breath, or delay it. She consulted my sister and her husband, also both physicians, but this was pro forma. She didn’t really need them. She knew what she wanted, she was in control, she had come to the end of a long and eventful life, she was regnant upon her hospice bed.

Her father, my Czech grandfather, was a traveling salesman who traveled from Vienna to Yugoslavia to sell high-end leather gloves. My mother adored him—she was an only child—and dreaded his departures. The promise of a gift upon his return soothed her. It was always a leather-bound book, inevitably a classic. By age 10, my mother had her own library and become an avid reader. In America, in my childhood home, there were bookshelves in every room, the library organized by subject and author. My stepfather had his own shelves, his own interests: dictionaries, history, Goethe and Heine in German. My mother never read a word of German once she was on American soil. She spoke English, she spoke French and that was enough once she’d disembarked. It was odd and troubling, at times, how she’d rejected her mother tongue.

Often, I’d want to borrow a book and if I took it off the shelf and held it in my hand, she’d become agitated. Books were her totems. The library held life together, it was a commentary on the past and present, perhaps even the future. If it was disturbed, I thought, this held-together world might collapse as it had in Europe when the war began, and all was left behind, so many loved ones murdered. So I was careful, I always asked, I always returned books to their proper place on the shelf and rarely took one away. Which probably explains why my mother constantly bought me books and insisted that I read them right away so we could have a discussion about them. Many were duplicates of the books on her own shelves, and though this may seem profligate, it was not profligate; it was necessary.