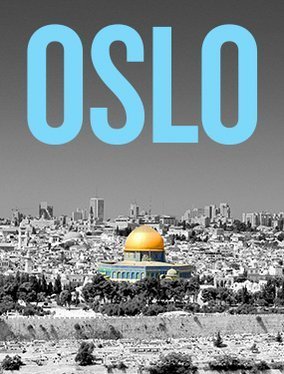 "Oslo," courtesy of the Lincoln Center Theater
I went to see “Oslo,” by J.T. Rogers when it was still in previews at the Lincoln Center Theater. The advance press was intense. Rave Reviews. I was disappointed—an understatement—perhaps one of the few that evening who was not applauding or sighing with relief at the promise of “hope” in the Middle East. We need more than hope or sentimental plays right now to set the world straight. And so I was doubly surprised when some of my internationally astute Facebook friends praised this play. Perhaps we are all so down-in-the-dumps these days that any glimmer of “hope” is welcome, even in a play that doesn’t work as a play.

Forgive me, dear Reader, but “Oslo” is not a theatrical experience, it is a soapbox experience about back-channel meetings early in 1993 while the First Intifada was still raging. The meetings culminated in a handshake on the White House Lawn between Arafat and Rabin, President Clinton presiding. Rabin was assassinated two years later. Much has been written about all of this, most notably in an article in The New Yorker by Connie Bruck which is informative without distortion or polemics:

The end of the “ handshake,” as the rapprochement came to be known, led eventually to the Second Intifada and to the upsurge of violence and despair today. This is the unexpressed undertow in the play. So why was the audience laughing?

I looked at the stage, I looked around at my fellow theater- goers. The actors were bored with the pedestrian script, I decided, and they were grandstanding to amuse themselves, stay awake, and remember their lines during a very long and wordy play. As for the audience, they seemed relieved to be feeling something.

Though based on historical research, the play is imbalanced. The most important characters were not the Palestinian and Israeli delegates, but the Norwegian couple who persuaded them to attend the talks –Mona Juul, then an official in the Norwegian Foreign Ministry, and her husband, Terje Rod-Larsen, who was director of the Fafo Institute for Applied Social Sciences. This couple deserve a medal for what they accomplished in Oslo: they kept the talks secret, and defied the expectations of the meddling Americans, among others. But they are oddly absent in the play except as foils.

What if this play had been told from diplomat Mona Juul’s point of view? Or even her husband’s? Or both of them? Now that would have been an interesting play. This one isn’t.