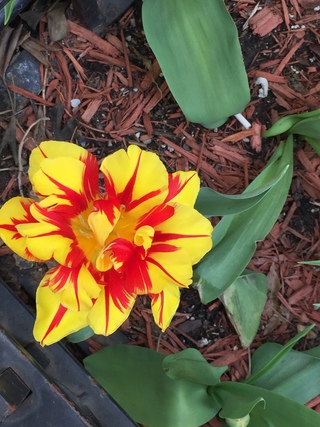 My first hashtag: #mentaldetoxspringrenewal . Photo by Carol Bergman
I think I just wrote my first hashtag: #mentaldetoxspringrenewal. I sent it to my daughter. I wanted to show off. Now I am wondering why I resisted hashtags until this moment and why, suddenly, I wanted to write a hashtag. Are they contagious? And where on earth did the word hashtag came from and who was the first to use one? The answers to these questions are in a Wikipedia entry, and they are complicated. Suffice to say—in measured narrative prose—that hashtags have #takenofflikewildfire. Now is that a sentence or a real meta data hashtag? Neither, I’d say.

I vividly remember resisting –and eventually surrendering—to Facebook. Surrender finally came when I “found” my college room-mate and an old boyfriend. I wrote blog posts about my resistance and surrender and figured out a way to beat abbreviated posts: I only write full sentences, and more than one. Sometimes I post a photo and write a story—yes, a full story—to caption the photo. It’s good writing practice.
I now have three Facebook sites, use them to advertise my workshops, my publications and my publishing company, and friend people who I meet casually here and there. I even friended my bank manager recently. He was interesting. I write notes and blog posts and participate in a lot of political discourse these days. I follow, unfollow, de-friend and de-capitate only occasionally. Dear reader, please don’t do that to me.

Margaret Atwood, author of “The Handmaid’s Tale,” and many other challenging books, loves hashtags and she loves tweeting. I heard her talk about it at a PEN conference maybe five years ago, but I still didn’t get it. By then I had a Twitter account but never used it except to watch, supinely, as my FB Carol Bergman: Writer posts fed into it. Once in a while I received a notice that someone was trying to contact me through Twitter, and only then did I pay attention. I still don't tweet but if you tweet me, I will twitter like a bird.

As for hashtags, I don’t think I will surrender until I can figure out a way to use them that satisfies me as a writer. I don’t want my narrative brain to atrophy and I don’t want my students to communicate with me or each other in sound bytes or 140 characters. When and if you have the pleasure of walking into my classroom, this is what you will hear from me on the first day: We’re writers. It’s our mandate to preserve our language and participate, fully, in its evolution.