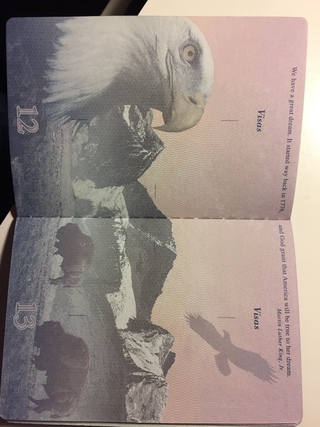 One of the interior "visa" pages in my new passport. Words by Martin Luther King, Jr.
My new passport arrived last week. It looks and feels different than my old passport, which I had to surrender to the State Department. A passport is not a souvenir, it does not belong to us personally, it belongs to the government. And it is now a traceable, electronic document; it has a chip. No wonder it feels different. We all do.

I had never studied the interior (visa) pages of my passport, never read the text from cover to cover, never appreciated its design, or the etchings and quotations. If I were stuck in an elevator with nothing else to read but my passport, there would be plenty to read until the fire department arrived to rescue me. And plenty to think about, too. What has happened to the so-called American dream? Does our Constitution still make sense? What about Lincoln’s words, quoted on the opening page: “And that government of the people, by the people, for the people, shall not perish from the earth.” Memorized in junior high, I can still easily imagine that great man reciting those incisive words. His words, and all the words in the passport, are not platitudes; they carry weight.

The first American passports were issued during the American Revolution to Benjamin Franklin and his aides as they embarked on their mission to France to raise money and military assistance for the Patriots. Ben Franklin had a printing press, he printed them. They were just a sheet of paper with a description—words only—of the bearer on one side; the description was in French, the diplomatic language. I don’t remember if any women traveled with Franklin—he established a new “family” in London, I recall—but American women were not allowed to carry their own passports until they/we “got” the vote in 1920. I cherish that piece of American history, and I cherish my new passport and what it implies and confers: citizenship and responsibility.