Remain Calm While You Read This 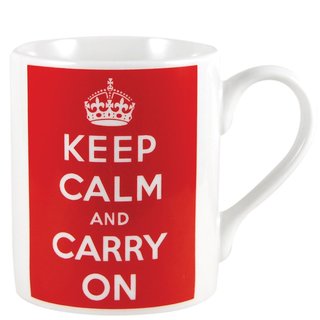 My"Keep Calm and Carry On" cup. Every home should have (at least) one for those special cliff-hanging moments, personal and political.
We were eating in a Japanese restaurant in New Paltz when my daughter slipped me a carefully folded note: “Remain calm while you read this…” I opened the note and read further: “Hugh Jackman and his family are sitting to your right.”

My daughter and I are Hugh Jackman fans, not “Wolverine” but “Les Miserables” on Broadway, 2013, Jackman singing and dancing. Plus, my son-in-law looks a lot like him, but is even more handsome.

Of course, when one is told not to do something, how can one resist? In fact, this is a psychological phenomena similar to the urge to jump off a cliff, a bridge or a high building, no suicide intended. The French have a poetic phrase for it: L’appel du vide. The call of the void.

I looked all around, desperately trying to avoid looking to my right and to stay calm. I saw other diners chatting and enjoying their sushi. Then I saw HIM, or felt him, more probably, as the tables are in close proximity in this serene, small-town restaurant. Hugh Jackman! His wife was across from HIM, two kids, one on each side of the table, if memory serves, everyone enjoying their sushi. I’d be a terrible spy for The National Enquirer as I don’t recall all the details, just my embarrassment at discovering them, so to speak, though I had been told to remain calm.

Suddenly, I felt more than embarrassed, I felt nervous. And that is strange because I have interviewed more than a few celebrities and they are, as I have written here, just recently, persons to me. It is my mandate, as a writer, to write about them in the most human way possible, right? So why was I dumbstruck when my daughter handed me the note? L’appel du vide, obviously. I had jumped off a mental cliff.

Remember the British WW II poster: “Remain Calm and Carry On?” More than two million were printed in 1939 in anticipation of the Nazi advance across the Channel, but they were never distributed, they were stored away, only to be rediscovered in the 21st century and reprinted ad infinitum on cups and t-shirts. And the reason the posters were not distributed is interesting: the War Ministry didn’t like the wording, they thought it was condescending. As everyone knows, Brits always carry on, they can be trusted to carry on, it’s in the DNA.

But back to the restaurant: I think my husband felt my muscles tense and put his hand on my arm. I tried to eat and look straight ahead at my daughter and the mountains beyond, but I didn’t say a word. I carried on eating. And so did Hugh Jackman and his family. Had we allowed ourselves to speak casually to one another, as neighbors in a restaurant often do, I think we would all have agreed that the food was good.