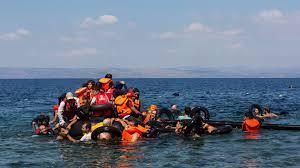 This year, more than 400,000 refugees have landed in Greece. Photo: Courtesy UNHCR
A friend’s daughter, Sarah, recently graduated from college, and went to the island of Lesbos to teach English to Syrian women in a refugee camp. We are Facebook friends and I noted that she’d put up a post or two during her three-month “mission,” the word relief workers use to describe their forays into the netherworld of refugees and the internally displaced, as the UN calls them. There is a lot of jargon in this netherworld. I think the word “mission” originated in the religious relief organizations, of which there are many. The word “testimony,” of which more later, also comes from a religious tradition. Relief workers are, by definition, outsiders, yet often find it impossible to stay neutral in their opinions, especially in a war zone, and when they write about their experiences some say they are “giving testimony.”

Sarah posted Facebook photos with short captions, not of her refugee students, but of herself, a friend or two, I recall, a cerulean sky. I didn’t ask if she kept a journal; somehow I knew she would. Then her three-month EU visa was up and she left Greece for Morocco where she has been studying Arabic. She was never a constant Facebook user, but I missed the occasional posts she put up from Lesbos. I was confident she eventually would write her story and perhaps use some of these posts—photos and text—as well as her journal entries to document an essay.

Then a phone call from Sarah’s father, Steve, reassured me that all was well with Sarah in Morocco, more than well. Steve is a physician, enough time had passed for Sarah to obtain a new visa for Greece, and together father and daughter met in Lesbos for a couple of weeks--a short mission--to work in the same camp where Sarah had been before. She had missed her students and reunited with some of them; others had moved on. Steve worked with mostly Congolese refugees in a clinic. Such work is challenging, taxing, and often very upsetting.

Relief workers are expected to sign time-limited contracts, not to stay on and on, or shift agencies and take on other missions one after another. They get hooked. They have to be encouraged to take R&R, take care of themselves, and one small way to do this is to keep a journal and to use Facebook to write long captions to their photos. Social media now amplifies journals and emails; it’s a useful tool.

It was not difficult to gather stories for my book, “Another Day in Paradise,” even though the logistics were often daunting. Eventually, I traveled to London, Amsterdam and Geneva for editing sessions, and emailed drafts back and forth numerous times. Without exception, all the workers were avid readers, kept journals, and had a fundamental understanding of how to shape a story.

Now Steve and Sarah, father and daughter, after just a short time “in the field,” have many “witnessing” stories of their own. I look forward to reading them.