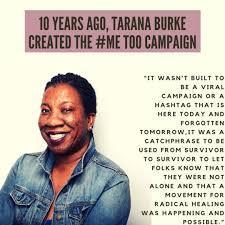 Tarana Burke has been invited to ring in the New Year at Times Square.
The term is over, grades are in, I’ve done my holiday shopping. It’s time, I’m weighing in. I have to say something. How can I justify remaining mute? I’m a woman, a working woman, who has experienced her share of harassment and discrimination over the years, once quite recently, as you will read below. So I’m back at the computer trying to lace together coherent thoughts about the recent fraught weeks of sexual allegations, confessions and tumbling heads. What’s striking is how similar all the stories are, as though the words and sentences were churned out by a Hollywood script factory. What would Hawthorne (“The Scarlet Letter”) , Roth (”The Human Stain”) or Arthur Miller (“The Crucible”) have to say if they were still writing? That there is historical precedent, undoubtedly: the witch trials, the McCarthy era, America’s “persecuting spirit.” But these writers, much as I admire all of them as writers, they were all men. And this situation, this moment in our history, it’s similar, but also different. It arrives at the end of a dark year, a man in the White House who, himself, has been accused by no less than twenty women of sexual “misconduct.”

So let’s begin with this: every organization, corporation, and institution, including the United States Congress, needs a transparent and reliable mechanism to sift through allegations. Are they true or false? Is this a vengeful denouncement or real? Bill Cosby is not Charlie Rose. One will possibly go to jail for—allegedly—drugging women to have vampiric sex with them when they are out cold, the other will crawl under the couch and, sooner or later, figure out how to regain his amour propre, the French gender-neutral expression meaning self-respect.

What about heartfelt mea culpas long after the fact? Do they make a difference, or not? Shall we consider them as we study what’s happened and mete out punishments? Shall we banish or forgive?

Less obvious for me are these questions: Why are some powerful men still behaving so badly? Why don’t they know that what they are doing is not permitted even in law? Why are some women not accusing openly in situ, as it happens, or soon after? Why do some men fall and others amplify their power for years and years? Why has one become president of these United States? Why do some women succumb to intimidation and others speak out forcefully? What can all of us learn from this sordid episode in American history?

“Understanding is a two-way street,” said one of my feminist heroines, Eleanor Roosevelt. So let me try to understand the man who came into my classroom this past term to berate me in front of my students for writing on the screen instead of the whiteboard, and who thought he could get away with it when he said—in front of my students: “That was an $8,000 mistake.” He knew nothing about me except the monniker “professor,” and perhaps that was the problem, and our encounter was more about class and status than power and prowess, or perhaps it was both. When he left the room I called his supervisor, immediately. He came upstairs. He was alarmed. This man could lose his job if I formally charged him.

The perpetrator—for this is what he was even though he did not lay a hand on me-- wasn’t finished trying to reduce me, a woman professor, to supplicant: he waited for me after class, waved his finger at me and told me to “never do it again,” meaning what exactly? Write on a screen instead of a whiteboard, or dare to report him?

During this second encounter, the hallway had emptied out, I was headed home, I was alone with him on the fifth floor. I said nothing and walked away, down the escalator, as fast as I could go.

Words and gestures matter; they have an escalating power. Talk one day, abuse and violence the next. I was not comfortable and that, in itself, is cause for concern, and against all the mandates of the university that employs me. These rules were not in place a mere decade ago. We fought for them, and I am grateful for them. They are a civil right.

So here’s another Eleanor Roosevelt aphorism: No one can feel inferior without their consent. But what about feeling afraid? What about that? The women coming forward are now in a community of women, sharing experience and language to tell their stories, safely. Hopefully, their example will give other women, especially young women, the courage to speak out quickly whenever they are confronted by intimidation, harassment, hateful words, threats, or—worse—physical violence and rape. This is the spectrum of misogyny—contempt for women—we have been hearing about in recent weeks.

When a predator comes lurching into our personal or work space—whether we are male or female, gay or straight, transgender or gender fluid—it’s incumbent upon us to at least try to stop him, for our own sake and, ultimately, for theirs.