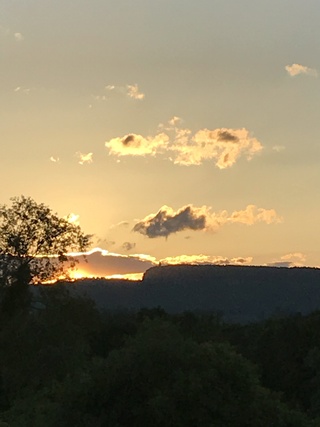 Sunset over the Shawangunks © copyright by Carol Bergman 2018
I needed a long, solitary walk to clear thoughts of mental illness and suicide from my writer’s brain. Writers are sponges and the news of Anthony Bourdain’s death, the eulogies, the news loop; I had to turn off the TV. These two high-profile suicides—Spade and Bourdain-- were reminders of the daunting challenge of trying to help those near and dear who are suffering. We all know someone. We may be that someone.

I walked past a horse farm where a stallion and a donkey share a shed. I called to them and they came up to the fence. Though I had no hay to offer, they allowed me to pet them. I immediately felt better.

Years ago, in London, a gifted Israeli playwright we knew, Naftali Yavin, “suffocated” in his sleep at the age of 36. That was the official report. As in the deaths of Robin Williams and Philip Seymour Hoffman, Yavin had abused drugs and alcohol. Were they used to medicate his despair, or did they exacerbate his despair, or did they cause his despair? And if he was overcome with melancholy, rage, or existential angst, why wasn’t his art enough to exorcise his demons? Why isn’t art ever enough to heal drug and alcohol induced brain changes? Because it isn’t. That is why addicts use the present tense, or the continuous present tense, when they refer to themselves in twelve-step meetings: I am an alcoholic, or I am a recovering addict. They never say: I’ve recovered.

Where was Bourdain in his recovery? Had he slipped? What will the autopsy reveal? How can we deter young artists—or chefs, who are artists—from using drugs? Is it realistic to hope that this is possible?