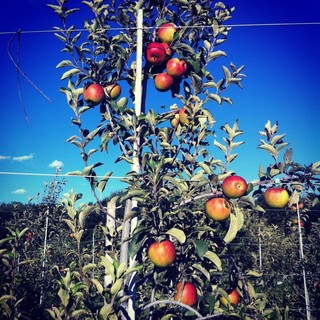 Crimson Crisp Certified Organic Apples at Westwind Orchards in Accord, New York
I’ve never worked in a deadline newsroom but I’ve always had feature editors who glaze over during a pitch and insist upon finding the story fast. Where’s the story? they ask skeptically, which is their job. In workshop, I call “finding the story” the armature, which is more than the theme or motif; it’s the infrastructure, the deep meaning of the work. Even a longer narrative has an armature, though there may be more than one. Still, all armatures must be linked if the work is to be viable and coherent.

Not a segue exactly, but I’ve been following the story of apples in New York State, and trying to find the story so that I can write something about them. I love apples, eat at least one a day as my physician mother taught me, and have been known to eat them top to bottom, core included. No more. If the apple is not organic, please note: the core is a receptacle for pesticide.

I thought this was going to be a benign and happy topic for me, a respite from all the terrible news, but it’s not; it’s connected to all the callous disregard we are experiencing right now—for the environment, for world peace, for desperate immigrants and their children spilling over our borders.

Already, I digress from my stated armature. The mind wanders. Let me begin again here:

The euphoria of living opposite an apple orchard in a converted apple cooler has worn off. When we first arrived in late March there was still snow on the ground and a couple of mornings a week I got out my ski poles and walked a road into the orchard, around the orchard, and through the orchard. Because I spotted a house on top of the rise, a house with swings and two cars, I penned a heartfelt letter asking permission to walk into the orchard and left it with the tenants to give to the owner. I never heard back; perhaps they knew my request would be moot once I found the armature of my apple story. (Please see my still innocent blog post of April 23rd.)

I kept walking into the orchard for a while, without permission. I carried a plastic bag and picked up debris. I found a hawk’s feather, said good morning to the ground hogs and crows.(I even love the crows, I have decided.) And then the snow melted and it was spring and no sooner was it spring than I heard a roaring sound and saw a spray truck spitting pesticide or fungicide into the trees. Several evenings a week.

I contacted the farmer:

“What kind of chemicals are you using?” No reply.

“Are farmers allowed to spray conventional pesticide or fungicide in their orchards?”

“Yes. They are controlled. We inspect, but yes.”

I contacted the Ulster County Department of Health:

“Is there any evidence that the pesticides from this apple orchard have leached into the ground water? We have two wells on this property and the apple orchard has been spraying for decades."

“Absolutely not. That well water is clean as a whistle.”

Now here’s the dilemma, one among many: I am both a citizen and a reporter, an observer and a participant. I have to get the facts, digest the facts, and respond to them. And one of the facts is this: the apple business is big business in New York State. The growers may want to “go organic,” but it’s difficult; it takes seven years to be certified once the going organic process starts. What’s more, except for crab apples, other varieties are not indigenous to North America ; they were brought in by immigrants, by settlers. And with their arrival came disease. There are natural defenses against these diseases, but pesticides are more “efficient.” More than likely, the apple you are eating right now is loaded with them. Peel the skin. Don’t eat the core.

Most upsetting is the realization that the degradation of our environment is self-inflicted, that it continues apace, and that our efforts to respond to climate change and the use of harmful chemicals must also continue apace so that all the apples our descendants eat will be as clean as a whistle.

Interesting story! Perhaps you might consider getting your well water tested. The results may speak volumes.

The owner of the complex tests the water once a year and gives the report to the tenants. There was nothing about pesticide in the report. Stopgap measure is to Brita all water with a stronger filter they are now selling. I even use it to wash vegetables. If I had young children I'd be very concerned in this apple growing county. There is no federal oversight, especially now.