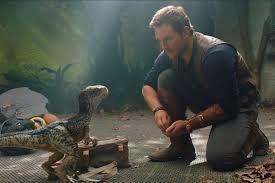 Chris Pratt (Owen) hanging out with little "Blue," a smart and compassionate dinosaur. Courtesy Jurassic World:Fallen Kingdom
It was a serious situation: three years after the destruction of the Jurassic World theme park, Owen Grady and Claire Dearing return to the island of Isla Nublar to save their beloved dinosaurs from a fierce volcano. Just minutes into the film, it seems, they encounter very bad military men with very big guns. Mercenaries! Enter endearing yet terrifying gigunda dinosaurs that have been re-constituted from DNA fossils. Spoiler alert: there’s a grand-daughter who is a clone of her mother.

It was boiling outside, as hot as a volcano, so it seemed like a good idea to get into a cool movie theater in our new little town. It’s tricky parking in the mall lot, the sun beating down, no tall buildings to cast protective shadows. So we covered the front seat with a sheet and entered another world: Jurassic World.

I don’t know why I like these films exactly. Maybe it’s because I like Michael Crichton and was very sad when he died in 2008, too young, at 66. My mother, who was also a physician, loved his books and the first one she handed me was “Andromeda Strain.” I didn’t get most of the science but was riveted by the characters and the story-telling. Like most of Crichton’s adapted- for-film stories, the book is much better.

In his books, Crichton posed serious dilemmas about science and contemporary life—misuses, abuses, the nature of evil. And he wasn’t always politically correct, particularly on environmental issues—but he was an educated, curious, thoughtful man who wrote exceedingly well.

Crichton’s nonfiction collection about his travels (called “Travels”) has been on my NYU reading list forever and students are often surprised it’s there. It’s there because Crichton’s quests were fascinating and the writing is strong.

The movie house was nearly empty and my first thought was: I hope it doesn’t close anytime soon because it is very different watching DNA reconstituted beasts on the big screen, and screaming and sighing and laughing in the company of other fans as vulnerable but brave good and evil characters are shredded, stomped on, badly injured or swallowed in one dinosaur gulp .

My husband tells me I was laughing most of the time. He didn’t have to tell me; I knew it. This movie is well-acted, well-made, diverting, and hilarious.

I recently read Crichton's novel "Timeline". Have you read it? It's a fascinating glimpse into time-travel to 14th Century France with "beam me up, Scotty!" (quantum physics) technology. Very believable, and with Crichton's usual mastery of suspense. Highly recommended.

I haven't read that one.Thank you, Cameron. This 4th of July week, I am re-reading Jurassic Park.