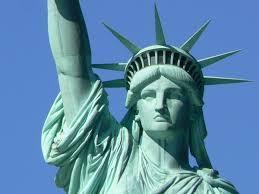 I've cropped the torch of liberty, but we can still "see" it, and feel it.
What kind of times are we living in? If I asked my NYU workshop students this question at the beginning of every session, their answers would probably sound similar. They are distressed, distracted, preoccupied, disappointed, concerned, even frightened, at times. As am I. Close to a primary election, I prevail upon them to vote not vent, or vent and then vote, and then wonder if I have crossed a boundary I should not cross into advocacy, though I know that in journalism and in the classroom neutrality is an illusion. Is there any writer who does not have a point of view? Of course not. Just think about how we frame a story—what to put in, what to leave out. It’s like a photographer who crops an image, or blows out a detail either distorting or eliminating what surrounds it, or emphasizing what matters to us.

Writers can sometimes be elusive and reclusive, or they can be annoyingly engagé
and write only to illuminate, blow the whistle, and persuade. If we read Jonathan Franzen’s fiction, for example, and then shift to his non-fiction essays, we segue from family saga to polemical narrative about environmental degradation, particularly the decimation of bird life. An avid birder, he wants us to share his concern. What matters to him, he hopes, will matter to his readers.

What kind of times are we living in? Hard times. Confusing times. It’s our mandate as writers to focus and clarify, reflect accurately, illuminate what’s hidden under the skein of the visible story, not let the tendrils of that skein pull us asunder before we can understand what is going on. Has there ever been such a gathering of intelligent, articulate print and broadcast journalists working as there are today?

My husband is an historian and political scientist and more optimistic than I am about strength of our Republic. He is glued to MSNBC and CNN and all the news and analysis he can read. He has an historian’s perspective and is already writing—in his head, not literally yet—the history of our difficult times as an historian would see it 10-20 years from now. So I count on him to keep events in perspective and to keep me informed. We begin our morning with my question: “Any new developments?” And he gives me the rundown, much of it troubling indeed.

I have zero tolerance for what is happening to our country and for the people in this so-called administration, and what they are doing to our language and to my students—the young ones in particular. Their feeling of hopelessness, their fear for the future, their dangerous new cynicism is new in my classroom. Young people, for the most part are enthusiastic, idealistic, and they cannot abide injustice. Given the opportunity to think and discourse, they question everything. Their silences since Trump was elected is unnerving. It even has a name: the Trump effect. Is this an unintended consequence of the reign of terror Trump and his handlers have unleashed? Or is it a calculated consequence? Are we expected to tremble and stop asking questions? Is there a Gulag waiting for us?

New York Magazine reported recently that 20,000 undocumented immigrants have been arrested by ICE in New York City in recent months. Some of these are parents of the ambitious and hard-working Dreamers who have passed through my classroom. I want to scoop them all up and take them home with me. I want to protect them from the anxiety they are all feeling every single day. How can they possibly study?

NYU has a campus in Shanghai. Not long ago the greatest challenge in my workshops were students from China who were quiet in the classroom, who would not speak. The reasons are various—cultural and political, mostly. Now this challenge of privileged, shy Chinese students—most of them children of government officials, seems quaint.

What kind of times am I living in? Zero tolerance times. It’s a law enforcement concept Rudy Giuliani admired and instituted when he was Mayor of New York. I was in New York when the “policy” began, running in Central Park one day when a police car careened down the West Drive and nearly killed me, three pedestrians, two other runners, and a mother pushing a stroller. It didn’t even stop; it kept on going. We exchanged names and phone numbers, caught our breath and shakily went on our way. Only later did I find out that the police were chasing three kids who were selling pot. And that they didn’t even catch them.

Giuliani is 45’s man. What was that I heard about stripping naturalized citizens of their citizenship? Did I hear correctly? Did my refugee parents flip over in their graves? Did 45 say it, or 45’s man, the one who had zero tolerance when he was mayor? Mr. Mayor: I have zero tolerance for you.

What kind of times are we living in? Hard times, as Charles Dickens would say. What can we do about it as writers and citizens? Stay awake. Stand up and be counted every single day. Speak out. Rally. Stay focused. Don’t lose heart. Write our hearts out. Vote.