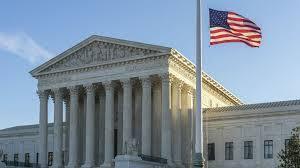 The flag at half-mast in front of the Supreme Court.

As the wolf attacks the sheep, so come we.


Let me remind you of the old maxim: people under suspicion are better moving than at rest, since at rest they may be sitting in the balance without knowing it, being weighed together with their sins.


I had a nightmare that Judge K was elevated to the Supreme Court. He went for a fitting of his robe and they couldn’t find one large enough for his rage, his self-pity or his ego. His head and neck were swollen with German beer. His breath was putrid. His female law clerks, all carefully chosen by his stage managers, became his special darlings. Never, he promised them, would he put his hand over their mouths if they screamed, never would he silence them if they wished to speak. He was a modern married man, a father of two daughters, he reassured them.

Years ago, when I was in high school, my lawyer stepfather handed me a book about the history of the Supreme Court. As a refugee from a despotic regime, he was enamored of the court. I cannot remember who the Justices were at the time—certainly there were no women as President Reagan did not appoint Sandra Day O’Connor until 1981—but my stepfather was enamored nonetheless. He followed all the rulings, read them, and told me to read them. These dry briefs became the triggers for interesting discussions and for a short while I thought that I, too, might become a lawyer.

Most admirable were the surprise rulings, my stepfather said. He was left-leaning, had grown up during the progressive Weimar period, and defended communists at the beginning of the Nazi regime. Virulent anti-Semitic ideology pervaded the courts when he was a young lawyer. Judges who did not comply could be imprisoned or shot. But in America, there were no such executions, not literally anyway; judges and justices are permitted evolution and change. This is known as “ideological drift.” It usually takes place after the president who has appointed him or her is out of office. Indeed, several recent studies of the courts have confirmed that ideological drift is not an exception, it’s a rule. Interestingly, it can go both ways: liberal-conservative, conservative-liberal.

I suppose this is, possibly , too-hopeful news as I write this morning, a necessary story of cheer after an emotionally grueling week. The struggle to end the nightmare continues. We cannot rest.

While it is easy to point fingers these days and we all do, someone has to call for a time out and a return to civility and decorum. The word tribalism is now used nightly on the news, and the fact that we consider party ideology a tribe, is scary. I Have always been an independent voter for that reason and vote the person, not the party. Let's all hope we are wrong about the new Judge, but be watchful that his agenda does not feed into more divisiveness.

With thanks, Randy, for reading the post and for your thoughtful commentary. It is always appreciated.