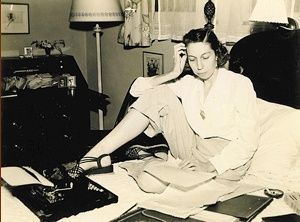 Eudora Welty writing in bed. Photographer unknown. Writers have hilarious habits including presenting themselves to fans fully dressed (in bed).

A la Edith Wharton, I remain in bed until the sun rises though I have no servants to bring me my tea on a silver platter. Still, it is a luxury to write in my journal propped up against the pillows. I begin the process of heating my brain in the quiet of these early morning hours. No phone, no obligation other than rousing myself into the day. I may read some of David Sedaris’ journals, the first volume recently published. Is there anyone who doesn’t love this guy? Does the much-and- unfairly-pilloried Jonathan Franzen wish he were David Sedaris? Meandering thoughts. Now it is 1999. My friend David is on an airplane to Germany sitting next to a very fat man. Ha! The guy is taking up two seats. The next day my friend David, currently living near Paris, is in his French class. His sardonic humor doesn’t quit even under pressure of acquiring a new language. Inspired, I continue my own comical morning routine and attempt to imitate David’s irreverent take on everything as I write my journal entry. I begin with the days just passed, already behind me and mulched into memory. For example, I cooked a turkey for the first time in a decade and because we are in a new apartment, and have only used the oven twice since we moved here last March, and the oven is electric, the manner of its heating and cooling is a mystery. The turkey cooked FAST and we had to rescue it before our guests arrived. Fortunately, they brought delicious side dishes so the dryness of the turkey did not matter, or was not even mentioned. Politeness! Gratitude for our hospitality! We toasted, several times, to old friends and new. Inevitably, we slid into politics or the programs we are bingeing on. Let’s make lists and pass them round, I suggested. Let’s not sully the day with you- know-what and you-know who. Let me distract you with a story about my work-out at the gym yesterday morning. Alas, it was closed today, I continued in a non-stop monologue. (I was the hostess and held the floor.) I went onto WiFi and listened to WBGO, my favorite station, and began to sing out loud as I pranced on the elliptical. No one noticed, or did they? I wasn’t sure. I kept on singing. A guy walked in and took the bike next to me and I said, “That’s your bike, make no mistake, I’ve seen you on it before, we all have our little routines and that is your bike.” His face broke into a huge smile. Why did I think until that moment that he was mute and sullen? Because it was still early in the morning, the sun just up, and we were both barely awake.