What We Save, What We Toss Away 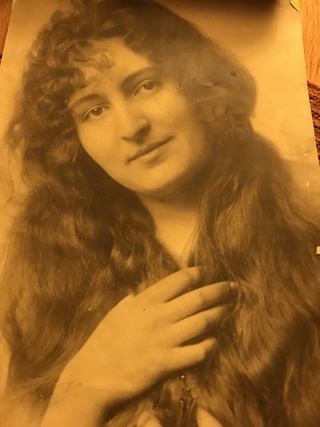 Lily Sobotka, a cousin in what was once a large, extended family. She was murdered in Auschwitz. Her image, which I had thought was lost, surfaced in one of the photo albums I had stored and forgotten.

I'm reading, skimming and sorting a cache of letters, photos and documents I'd forgotten I'd saved. They were stored in my daughter's house in a closet in her studio. "Time to liberate the shelves," she told me, gently. I had thought I was done with boxes for a while, but there they were.

Most of the letters, notes and drafts of articles and books date back to the 80's and 90's before I had started saving work and personal correspondence in folders on my computer and/or in emails in cyberspace. The shift from paper to cloud has been mostly exhilarating though I worry how biographers and historians will retrieve information. I remember—and how frail memory is—that I have reported --in this blog--throwing away two decades of journals when I moved out of the apartment where we raised our daughter. I am not a blockbuster writer and decided it was hubris to think that anyone would want to write my biography. That's how I justified the culling and, truthfully, I have never regretted it. Now the leftover cache caught me unawares. It did not hold any journals; I breathed a sigh.

"I need a glass of water," I said as my daughter plunked eight boxes in front of me. Eight!!! I sorted out a few things with her, loaded the car with what remained and woke this morning with the thought that I could toss it all away without looking at any of it. Or could I? What would I learn about my younger self? What, if anything, might I be able to use in a writing project—an essay, a short story, a book, a poem, a play? What joys might I find, or events that I mis-remembered, or friends who had passed away but remain vivid on the page?

Take it slow, I said to myself. Just a few items at a time.

Most difficult for me—emotionally—are the photo albums and papers belonging to my mother's first cousin, Renate. She and her husband, Arthur, migrated to California after many years of struggle as refugees in New York. They had no children so I was named as guardian when Renate was widowed and developed dementia. But California has strict laws and any relative living out of state has to relinquish custodial care to the state. I paid attention to Renate long distance, visited as often as I could, but not much was left of her estate or her possessions by the time she died. A box arrived and I stashed it away. Saturated with the pain of the Holocaust, I couldn't take any more. Another story, another reckoning. Would I still be sad? Or even more angry?

I opened the photo album. There they were—my mother and Renate—lying stomach down on a beach somewhere in pre-Anschluss Austria, enjoying their youth, innocent of what is to come, doing acrobatics and posing in their sexy swimsuits. Documents continue the story: a visa to Bolivia, a boyfriend in the US Army, a twisted smile in a passport photo.

As for the copies of my letters and early drafts of articles and books, some is illuminating, some is familiar, some feels as though it was written by a stranger. How odd that the stranger is me.

Time collapsed, time unstoppable. How do writers let go and move on when the past is often the subject of our work? Do we need the memorabilia to remind us of what that subject is? Or is it enough to integrate the past into our consciousness and work from there? These are the questions I am asking myself this morning as I fill another recycle bin with shredded paper.