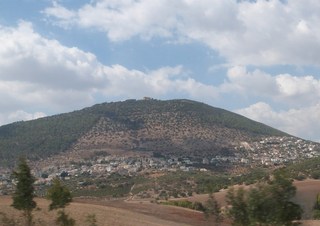 Big stories are embedded in our childhood landscapes. This is Mount Tabor.

Big Story # 1: A locker-room acquaintance is grieving for her mother and feeling perplexed that they were not close. She never could understand why the mother-daughter connection was always acrimonious, why her mother was, at times, cruel. What had happened? The search for an answer to this question is the beginning of a very big story that, hopefully, will be integrated into Sally's memoir. Previously unknown details are surfacing as far-away family visits, photographs are scanned and shared, memories untangled.

There had been a smallpox outbreak in the city in 1947, mothers sent home, their newborns left in the hospital as they had no immunity and could not be vaccinated.  Bottle feeding was in high fashion after WW II and breast feeding frowned upon.  So the babies were left behind bereft of their mothers and breast-milk immunity if their mothers had been vaccinated. More than 6 million New Yorkers were vaccinated during that epidemic; twelve died. It was the last smallpox outbreak in the city, historic for that reason alone. Eventually all those newborns were released from the hospital but by then the mother-baby bond had been compromised, not for everyone, of course, but in some instances. And this unearthed not-so-small fact is illuminating, the beginning of a big story. Everyone has one buried somewhere,  either within our own families, the communities in which we were raised, or elsewhere. If we want to write, such material is a treasure trove. And it's our mandate, as writers, to reveal, reframe, offer a new perspective, encourage deep thinking, challenge convention and expectation, and enrich the written record.

Big Story # 2 today: If a small boy, merely five years old, wanders the mountains at the edge of the desert in Palestine and the desert is behind him, and he can see the olive grove in the distance, and his parents do not worry about him, but forever after in the dislocation of an occupied Palestine and exile in France, and then America, he dreams of mountains, that is the poignant beginning of a book. For many years I have encouraged Rashid to begin writing his big story. He comes from an oral storytelling tradition and it is wonderful to listen to him at the dinner table, or in front of  the wood burning stove on a winter's night, but I also want him to write his stories down, to enrich the written record.

Please do not keep your  big—or—small stories to yourself. Write them in your journal. Write to me. Caveat: Do not post all your stories on FB. Many writers, including yours truly, use FB as "practice." Indeed, captioning is a good discipline. But is it always wise? Be wary of giving away your work for free on the internet.

With all best wishes,