Dispatch From the Arctic 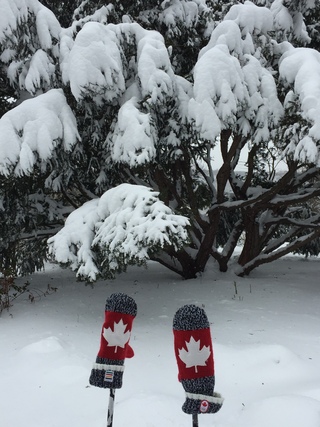 With thanks to my Canadian cousin, Sherry, for these toasty mittens. Photo © Carol Bergman 2019

I had a dream when I was twenty-two that someday I would go to the region of ice and snow and go on and on till I came to one of the poles of the earth.

The story of the storm is not over; we are now living in the Arctic. I suppose we had been warned-- not warmed, but warned-- that climate change creates changes in the ozone layer, therefore the polar vortex is rotating at ever faster speeds, or perhaps it is slower speeds. (I do wish that scientists would translate their findings into accessible language and simple sentences.) I have been reading about the polar vortex for several days, trying to comprehend, and now the vortex is in my face. The temperature upon exiting our complex this morning to brave a drive to the local gym was 0 degrees. The car started up okay—with a bit of protest, more like a cough, I'd say. A local friend texted to say she'd arrived at the gym, the roads were okay, the parking lot a bit "slippery." Good news, more or less, if what she means by slippery is what I mean by slippery.  "Warm up your car, leave it running," she suggested. "Walk away, come back in a few minutes, no one will steal it."  So that's what I did.

One small problem:  I couldn't get the car door open again. Did everyone hear me when I shouted expletives that ricocheted across the mountains? I think so. A helpful neighbor came out of his apartment. And he was laughing, but very kind. I had a second key, the lock was completely iced-over and with a flick he opened the door and said, "Your first winter. You'll get used to it." Goodness, he didn't even have on a warm coat. His hands were bare.

Well, I was lucky to get the car out at all. Several in our lot were still completely iced in. If you have never seen icing on a car, you are in for a treat. It's really quite beautiful.  Yesterday, as the storm abated, several tenants worked on loosening their cars from the vortex knowing full well we'd have trouble again in the morning. Still, we persisted. Implements included ergonomic shovels and hardy scrapers. My husband, Jim, was particularly good at the ice knocking and ice scraping. "The air is so fresh," he said. "Right," I said. "Let's keep moving, shall we, and get back upstairs pronto."

And none too soon. Our new wind-breaking, layered, waterproof jackets were frozen solid.