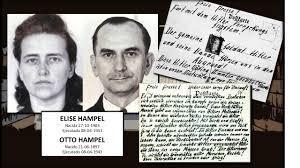 Otto and Elise Hampel were a working class couple living in Berlin during the Nazi reign of terror. He was a factory worker, she was a domestic. They were Nazi sympathizers, or Nazi sympathizers by default, if that is possible. Let's just say that they did not know any better at the time. Sound familiar? After Elise's brother  was killed in action in France in 1940, they woke up. Something was wrong, they decided. But what?

Uncultured and semi-literate in a culture that was noted for its literary masterpieces, the Hampels began to scratch their own version of resistance propaganda on more than 200 postcards, which today would read like sophisticated agitprop. The messages were simple, yet forceful, despite many grammatical errors and misspellings. They admonished ordinary citizens to protest the war machine by not serving in the German Army and refusing to donate to Nazi organizations. Though the Gestapo was everywhere, the Hampels scattered the postcards in mailboxes, stairwells and other locations all over Berlin. Resistance had taken hold of the Hampels and they hoped that their non-violent action would inspire others. It did not. Most people who found the postcards handed them to the Gestapo and the Hampel's were eventually caught. In 1943, they were both executed by guillotine. Their story was unknown until Rudolf Ditzen, aka Hans Fallada, was given their Gestapo file by a poet friend working for the Soviets just after the war. Fallada was smitten with the Hampels and wrote a novel about them in just 24 days called, "Every Man Dies Alone." Published in 1947, it became an instant best seller and has now been adapted into a movie, "Alone in Berlin," which I watched the other night on Netflix. Although it takes some liberties with the facts, the basic story is there, the dignity of the couple beautifully portrayed by Emma Thompson and Brendan Gleeson. Some of my favorite young German actors are in it also, most notably Daniel Brühl and Katharina Schüttler.

Thinking about the Hampels as exemplars of extraordinary courage, my mind drifted to the silent, complicit majority in the United States Senate. They remain unmoved by the atrocities of the current administration and will be remembered as politicians who have damaged and disgraced our democracy.