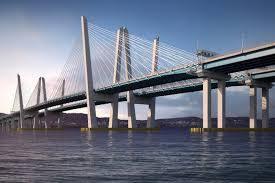 We drove over the new Mario Cuomo Bridge last Sunday for the first time. It was a mistake; we'd intended to drive down the east side of the Hudson. Deep in conversation, we weren't paying attention and forgot to exit the Thruway at Poughkeepsie, and then again in Newburgh.

My husband was driving but it wasn't his fault; it was the Garmin's fault, the phone's fault, my fault for not plotting our route with my usual focused energy. The only cognitive bridge available was a paper map in the trunk, a document we could READ. Doesn't every map tell a story? We start here and proceed from here to there. This is our route, clear as the daylight we are traveling in, and this is the timeline and historical through-line of our journey: beginning, middle, end.

Those worn folds on the map—remember—the ones we had to scotch tape together? And the designated navigator, remember her? It was always my mother when I was a child as my stepfather never let her drive. She was as sloppy with the map as she was with the newspaper. Whereas, my stepfather was a meticulous folder of both. I have some of these old family maps, and older ones, too, as I once collected them from flea markets and thrift stores as memorabilia of a bygone car- travel-only-age. There they sit browning in a bag in the trunk. I have not been able to donate them, or trash them, or recycle them, and on this particular Sunday, I could not retrieve the most appropriate, nearly current map from inside the trunk, albeit I was in the navigator's seat trying to decipher what the Garmin was telling us and what Google Maps was telling us, which seemed contradictory—so who needs a paper map, right? I wanted to pull over somewhere, but there was nowhere to pull over. Alas, we were already late for a brunch so kept on going.  It's never a good idea to keep on going. This is how explorers get lost. I am an aficionado of polar literature and I can attest to this. Getting lost is the armature of Arctic and Antarctic literature.

Then, suddenly, we were flying over the bridge and didn't care. The old Tappan Zee has been demolished, expunged from history. Opened in 1955, it honored the Tappan tribe, River People, who spoke the Unami dialect of the Lenape language and welcomed the first Europeans before being slaughtered or infected by them. The original bridge was a memorial to this painful history.

But we've moved on, as we always move on in America, thoughtlessly at times. Our historical memory is short and the digital age is upon us. This new bridge is a masterpiece of engineering and it is aesthetically transporting as well as capacious enough to accommodate increased traffic flow, eight lanes across, the largest bridge ever built in New York State. Who needs that many cars? How are they impacting the environment?  Will the bridge last long enough to accommodate a serious commitment to public transportation? Will paper maps make a comeback, like paper books are making a comeback, or are they merely—and  forever—collectibles?