Over the Mountains and Into the Sea 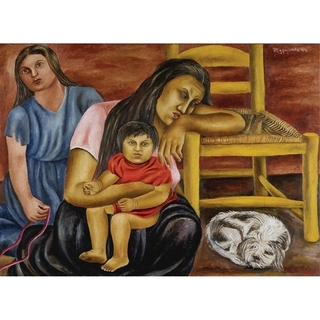 A Pieta by Maria Izquierdo, a lesser known Mexican painter (1902-1955) but no less powerful than Diego, Tamayo, and Frida.

Their clothes were shredded and reeked from natural and chemical odors. They had drifted into an oil spill on a raft of logs. First it was warm, then bitterly cold. They would have preferred a trek across the desert if only for a few minutes. They encountered desperadoes. They made it to a chateau and were permitted to use the telephone. They could hardly speak. Thus has the story come down to us in fragments: their courage, for example.

This is not a film script; it is an account of one escape among many escapes. My own paternal grandparents.

They chose the wrong escape route. They did not make it.

I read the stories about America's atrocities on the southern border, and the ICE raids—they will also round up "collaterals"—and  it is as though the fascist reign of terror crushed by the Allies in WW II has become undead and infected our government, a contagion spreading around the world. Like a germ that has remained dormant for a few decades—supra-nationalism, white supremacy—it  is with us again, persistent and strengthened. I know that this rendering is apocraphyl—there are laws now we did not have before—yet  it feels true to me today as the American government, itself, is lawless, amoral, cruel. Are there enough words to describe what is happening? Can we find the right words to describe what is happening?

We are witnessing a reign of terror perpetrated by our government. Somehow, the voting booth does not seem an adequate response.