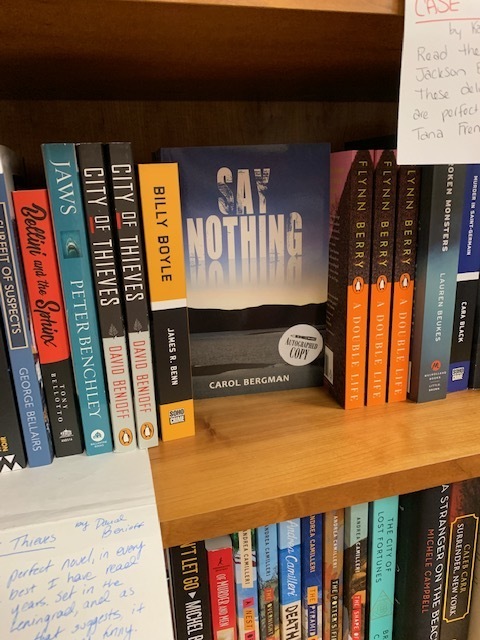 "Say Nothing" on the shelf at Oblong Books in Rhinebeck, NY. Photo: courtesy Elizabeth Roth

"Every time I make a film, the film also makes me."

I know many readers who devour books, read one after the other, swat them away like flies. Two women at the outdoor pool where I swim read one book a day, from what I can tell. They sit and read as their legs dangle in the water and chat to the lap swimmers as we walk down the steps to the lanes. I call them our "literary sentinels." Their reviews are pithy. This one is good, this one not so good. I have not dared to tell them I am a writer for fear that my books will also get swatted away in an instant. Do they have any idea of the effort it takes to write a book? I once belonged to a book club of voracious readers, none of whom were writers, and when they suggested one of my books, I foolishly agreed. They liked it more or less—that wasn't the point—it was the cavalier way they talked about it that hurt me and the speed with which they moved onto next month's choice. I can't even repeat their questions and comments here; I have suppressed them.

A kind and friendly neighbor told me she'd be reading "Say Nothing" on her journey across the ocean for her summer holidays. "Plenty of time on the long flight," she said "I'll take notes and let you know what I think about making it better. Then I'll write a review on amazon." When I said that I was grateful she'd bought the book, she was pleased. But when I continued with, "It doesn't matter to me whether you like it or not," she was not so pleased. I tired to explain without being crude or rude: "You're an avid reader, therefore you are my audience, but you are not a writer, you are a mathematician. I only pay attention to what writers and editors say to me about improving my work."

She was undaunted. Soon after her return she stopped me as I was taking out the garbage and started to ask me questions about one of the plot points. She didn't understand why the character was leaving bones as clues. I launched into my usual lecture about "reader response theory," which in a nutshell is this: The book/story does not exist until it is in your mind. It belongs to you. I am glad you have had a response to my work—good, bad, or bewildered—but I am not going to explain the choices I made to tell this story. And so on.

Then I realized I was wrong in one respect: marketing. I don't usually concern myself with marketing or audience as I am writing fiction. I suppose I should, but I don't. Of course I want to sell whatever I write—thus you may call me a "professional" writer—but if I think about selling as I am creating, I cannot create; I feel stymied, observed, discouraged and judged. And if I think of an "approving" audience as I am writing, or the accolades I may receive, I would develop a writer's block in an instant.

My conviction that it is necessary to keep one's process and work private until it is published has strengthened over the years. I encourage my students not to show their drafts to any wannabe editors—friends, families, significant others. And I suggest they develop a line or two as a rebuttal to a request to see a work in progress, or if it is easier, to blame me: "My professor says I shouldn't show you my work in progress."

Recently, a colleague published a literary memoir about her childhood that included a chapter about a sexual abuse she endured and survived. She did not want this one chapter of the book highlighted in a press release, nor did she want to talk about it during interviews despite the fact that interviewers and reviewers would undoubtedly go for the jugular in this #metoo moment. I admired her resolve; she'd written all she wanted to say on the subject. How she will fare during interviews and during Q & A's at readings is still unknown. This is her first book, her first exposure to the public. It's not always easy.