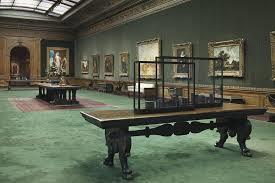 Edmund de Waal's vitrines in the West Gallery of the Frick Museum.

I went to the Frick Museum before my NYU class last week to see the Edmund de Waal site-specific installation, "Elective Affinities." De Waal is best known in the United States as the author of "The Hare With Amber Eyes," a memoir about his maternal Viennese (Jewish) family, the Ephrussis, whose mansion on The Ring was ransacked when the Germans invaded Vienna in March of 1938. De Waal was born in England and still lives there.

I was working on "Searching for Fritzi," the story of my Viennese family, at about the same time as de Waal was researching "The Hare With Amber Eyes," and we had some email correspondence. He was already a world-renowned ceramicist; the book enhanced his reputation. I didn't know him when I lived in London as a journalist, a missed opportunity.

That's the backstory of our six degrees of connection. I've kept track of de Waal over the years, his career, as well as his family's decision to take the Austrians up on their offer of citizenship, which I refused. The Ephrussi mansion has also been restored to them and they recently celebrated a family reunion there. So when I heard about the exhibition at the Frick, I knew I had to get there before it closed at the end of November.

I don't know what my expectations were exactly. Perhaps to feel de Waal's presence, his heightened sensitivity as an artist with Austrian ancestry, his narrative about art and its purpose. De Waal considers himself a European which, as an American, I do not, so what would his commentary consist of?

The Frick's rooms and collection mimic European hauteur. They are monumental in size with carpeted floors, damask curtains and skylights. De Waal's work is small, and mostly white. He rarely strays from white, he has often said. And though the vitrines containing his delicate porcelain pots gave me pause, "the pause of space," as one label suggested, I began to question this somewhat trendy curatorial commission—contemporary artists in dialogue with old master works. What does "in dialogue" mean exactly? Does it mean departure, inspiration, something more, or less? What did Charlotte Vignon, the Frick's curator of decorative arts, have in mind? She and de Waal are friends; they worked on a book together. What she has said, in interviews, is that she hopes visitors will reconsider the collection through de Waal's modern prism.

It wouldn't be the first time that a curator or editor had a different vision than the artist (or writer) they have commissioned. That might have happened here. Certainly the result is perplexing, even unsatisfying. Rather than reconsider the Frick's collection in the light of current events and new ideas about Western art, I found de Waal's vitrines intrusive, even humorous at times. Wee vitrines with wee porcelain pots, beautifully glazed, set at different angles. End of story, or absence of story. Alternatively, the scale of the vitrines may simply be swallowed up by the grandeur of the once lived-in mansion that is now a museum.

Even a docent I talked to was unsure what to say when I asked her what she thought of de Waal's work. We could both see that the dark gray glaze might have been a commentary on Frick himself—a steel magnate—or on the El Greco soldier in armor in the West Gallery, that was more or less obvious. But there didn't seem to be much else to explain, and we both went silent.

"There's no there there," I said, quoting Gertrude Stein.

"How much did you say Frick paid for that Rembrandt?" asked a visitor from China, not exactly a non sequitur.

At a moment of "total crisis in Europe," as de Waal has expounded to many reporters—referring to the migrant crisis and the retreat to insularity and Fascism—he has sold off 79 of his family's precious Japanese netsuke figures, hidden in a mattress by the family's maid during the war. The sale raised £79,590 for the Refugee Council. The rest of the collection has now gone on long-term loan to the Jewish Museum in Vienna.

There is not a whisper of de Waal's philanthropic preoccupations anywhere in the exhibition, nor was he able to convey them even tangentially to an eager American audience in this installation.