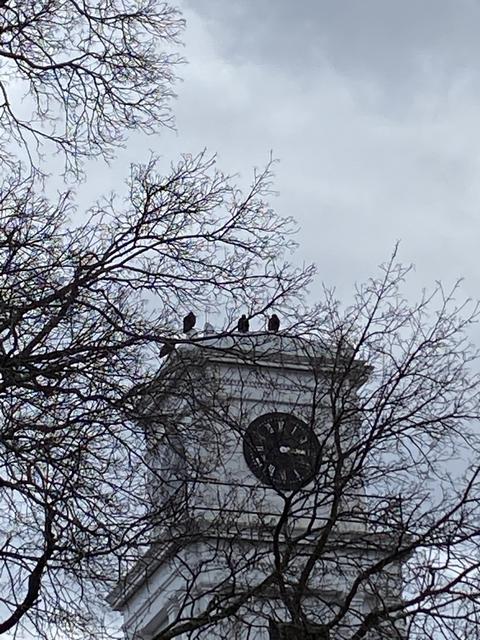 A flock of black vultures on the clock tower of the Dutch Reformed Church on Historic Huguenot Street, New Paltz, NY.

It was as if he were in a place that the whole world had forgotten, as if it were snowing at the end of the world.

I broke into tears when my daughter called me on Facetime today. She's only thirty minutes away on the other side of the Minnewaska Ridge, but it felt like an ocean. I had planned a trip up to see her on Thursday, and to walk her older dog, Willow, who is now thirteen, and who is very special to me, but we decided—because of unknown exposure--that it is best if we all "shelter in place," and reassess at the end of the month. This is for the benefit of the family, of our immediate circle of friends and colleagues, and beyond that—our communities, especially those most at risk.

For those who still do not understand, or accept, the urgency of "flattening the curve," I suggest they listen to Michael Barbaro's March 17th "The Daily" podcast interview with an Italian doctor. Barbaro was close to tears, as was the doctor, as they talked about the 1000 bed hospital just outside of Milan, and the more than 400 nurses who are either out sick, or so burned they needed to take some rest days. The doctor, in his 40's, had not been home to see his family for three weeks.

I've been thinking about the new vocabulary and new concepts we've had to learn just in the past week, "flattening the curve" being the most recent. We have moved from simple phrases such as "self-isolation," and "quarantine," to "containment, "social distancing," "executive orders," "sheltering in place," and "lockdown," which implies coercion and the possible use of military or police powers, as has already happened in China and Italy. It does not matter that one is an autocratic regime with unquestioned coercive powers, and the other is a democracy that abhors such powers, because every time we leave our homes to go to the grocery store, for example, we are playing Russian Roulette, endangering ourselves and others. The role of government at such a time is clear: it must be forceful and it must be decisive. If our civil liberties are endangered, we must attend to that danger also, but we must be alive to do so.

I think it was my visit to the grocery store yesterday that triggered my tears when my daughter called. The word "hoarding" was in my head as I woke inside a nightmare. I reached for my journal to write it down.

I had chosen to go to Tops, a very large supermarket in the mall, rather than my favorite small health store, because I knew I wouldn't be able to stay 6ft. away from anyone in that intimate space. I had my list and whizzed through the long aisles with its nearly empty shelves. I only encountered three other customers, all wearing bandanas for masks, and a guy in an electronic wheelchair looking bewildered. No workers were in sight until I arrived at the checkout line. I had managed to find a few necessary items, but the whole experience shook me. Thus, the nightmare. And even though a psychologist friend at the University of Sheffield reassured me that hoarding is a survival instinct, especially when there is no leadership, I couldn't shake the image of the empty shelves and ordinary people like you and me filling huge shopping carts to the brim without concern for anyone else. It takes fortitude to remain altruistic in such difficult times and we cannot be expected to be strong and thoughtful every day. But thinking of others does help me, which is why I like teaching so much and miss my students. I wrote to all of them today and heard back from a few in eloquent emails, and then I went out for a much needed solitary walk. The fresh air and chirping birds also calmed my faltering spirit. I stopped to snap some pics of a flock of black vultures on the church tower. (I find them odd and oddly beautiful.) Once home, I made myself a nourishing meal, chit chatted to my husband, and sat down to write this post.