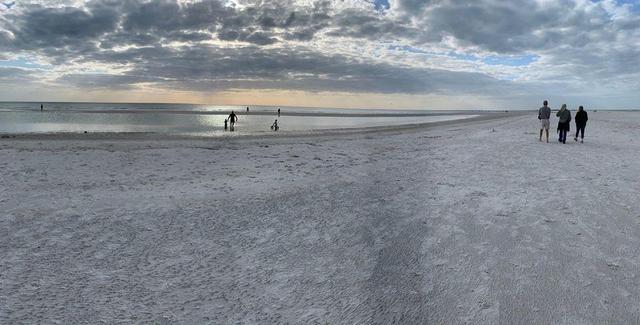 "Fort Desoto, Florida Sunset," © copyright Stuart Bigley 2020 With thanks to Stuart Bigley, co-founder of Unison Arts in New Paltz, NY, for permission to use the photo.

Sound of Gunshot, Sound of Crows

This is the second day in a row that birdsong, even the harsh caw of crows, has been disturbed by gunshot as I walked down Huguenot Street. I'm assuming that a nearby gun club is open so that the survivalists among us can practice their aim for the apocalypse they'd always known was coming. Or, maybe, they are just hunters getting ready for the season. For hunting enthusiasts interested in shooting and eating squirrels, the season in New York State begins September 1. If you would prefer shooting, skinning, de-feathering and masticating wild turkey when the supermarkets run out of perishables, turkey hunting season in New York State begins October 1. For "bag limits," and dates for deer, bear and other wild creatures living free of fear until hunters stalk them, please consult the New York Department of Environmental Conservation website. It's a government agency that does it's taxpayer-funded job: regulation, information, and policing.

Out in the big wide revved-up dystopian world, we should be so lucky to have all—and not just some—of our elected officials looking after us. My dear Canadian cousin, Sherry, has been steaming towards the United States from the South Seas for several days on the Massdam, a gigunda cruise ship. (Discussion of the environmental degradation that cruise ships perpetrate some other time.) David Ige, the Governor of Hawaii, allowed the ship to dock, to refuel, to take on some food and supplies, but only passengers with medical conditions and those who live in Hawaii were permitted to disembark. Sherry had hoped to fly back to Toronto from Honolulu and was concerned. She sent me a series of emails asking what I knew beyond what the captain had been telling the passengers. At sea for a while, they had not experienced the intensifying protocols on our borders, nor were they informed about the struggles between our state governments and federal government. I tried to explain and said I'd make some phone calls.

I put on my journalist's hat, took out my reporter's notebook, and got to work. First port of call, Hawaii's Department of Transportation, the agency responsible for landing ships. They sent me a press release. Here's the essential paragraph:

The health and safety of all people in Hawaii is always at the forefront of operational decisions. Presently, all state resources are focused and directed towards containing the spread of COVID-19. Allowing more than 2,500 passengers and crew to disembark will further strain these resources," said Director Jade Butay, Hawaii Department of Transportation. "HDOT and the State are allowing the ships to dock at Honolulu Harbor so they may refuel and restock. Neither ship had originally planned to make Hawaii its final port and both will carry on to mainland destinations, where more resources can be marshalled to handle the passengers and crew properly.

Every well-trained reporter knows how to work a story. The sound of gunshot does not stop us. We make one phone call, and then another, and another. We hope we will get the story. This press release was not the whole story.

I called Gavin Newsom's office, I called the Port of San Diego, I called the Coast Guard. The cruise ships are being tossed around like political footballs until/if/when the President decides to over-ride every Governors' decision with an Executive Order. The Governors are saying they have no resources to process passengers off cruise ships, they need federal assistance, which is not forthcoming. As we all know by now, there is a lacuna in the White House, zilch leadership, not even the thinnest notion of a Greater Good. All of us are caught at sea, riding the waves of the pandemic and the political turmoil that is America right now.

The Massdam is heading towards San Diego, due to dock on March 27. Hopefully all passengers will disembark, get processed, tested, or quarantined, gratis the Great State of California and its Governor, Gavin Newsom. If the repatriating flights into Canada are able to take off, Sherry will be flying over a closed international border. I'm sure she will be relieved to self-isolate at home.

We were on an earlier version of the MAASDAM (Holland-America Line) on one of my family's trips across the Atlantic back in the late 50s.