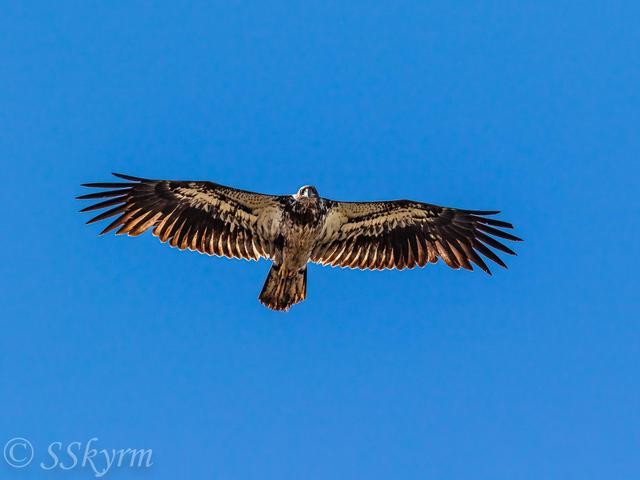 A soaring Juvenile Bald Eagle taken at the Missouri River, southeastern South Dakota by Susanne Skyrm, a dedicated conservationist and nature photographer, ©copyright Susanne Skyrm 2020. With thanks to Susanne for permission to use this captivating photograph.

Birds of a Feather

The first vcrse of "Hope Is The Thing With Feathers" by Emily Dickinson circa 1861, published posthumously in 1891

I've always loved this poem by Emily Dickinson, and even memorized it a few years ago, but today I wanted to write my own version, a departure from the original: Hope is the thing with feathers/We're all #inthistogther/ No matter the weather. This little ditty gave me much pleasure, inconsequential as it is. There's probably a fourth line to complete the verse, but it's eluding me right now. Feathers, bellweathers, flocking together, I don't know. I often wake in the morning with sentences in my head. Today this poem wouldn't stop. Maybe it was "hope" that kept it going. Maybe it was the snow flurries; snow flurries in April always loosen my writer's brain. Or maybe it was the movement of the car. I was driving up the mountain on the way to my daughter's homestead to get some fresh eggs, home-made sour-dough bread (my son-in-law is cookin'), honey (from last year's hive) and apples, and to walk the dogs around the property, and indulge in some virtual hugs and long distance 6 ft.-apart-with-masks-conversation, when I thought of Emily Dickinson's poem and how it rhymes with #inthistogether.

And do the feathers in Dickinson's poem refer to birds? No, of course not, it's a metaphor, it isn't literal. Literal is me out on the deck watching the birds of prey—black vultures and turkey vultures, hawks, falcons and eagles—soar on the wind off the ridge and descend for a luscious meal. The pickings are plentiful round here: groundhogs, squirrels, chipmunks, rabbits and other species I have not, as yet, identified. I've only been living free of concrete and embedded in nature for a couple of years. I'm learning, for example, that on some days the competition is fierce—eagles chasing off turkey vultures from their kill—other days it feels more peaceful, but that's only from my vantage. I'm not a bird so how could I know?

So engrossed was I the other day watching the display of these magnificent creatures that I missed my friend Norma's birthday, and by the time I remembered it was too late to call London. Happy Birthday, Norma. When I told her why I had missed her birthday, that I too was flying on the wind, out of the apartment and enjoying the fresh air and light, she asked if I was safe watching all those birds of prey. Of course, I explained. They aren't going to eat me.

Then I wondered. Would they? Maybe if I was road kill, which I am not planning to be anytime soon. And as I have deep respect for these powerful birds, I won't ever get in their way, I will just silently observe. I don't even need binoculars, though maybe I should pull them out now and again to get closer, though I wouldn't want to be too close.

A while ago, when I was at my daughter's for the weekend, looking after the animals, I took the compost out in the early morning, let the chickens out, started to spill the compost for them, and whoosh, a red-tailed hawk swooped down for breakfast right over my left shoulder. It was as though a tornado had suddenly come up without warning. I threw the pail in the air and screamed so loud the neighbors heard me. The hawk got clean away albeit without her breakfast, leaving a wake of terror, among chickens and human alike.

Lovely to learn of Emily Dickenson’s poem of hope and love how you fly with those words into your post. Now I must read the poem.

Your fourth poem line -
“human contact is the tether”