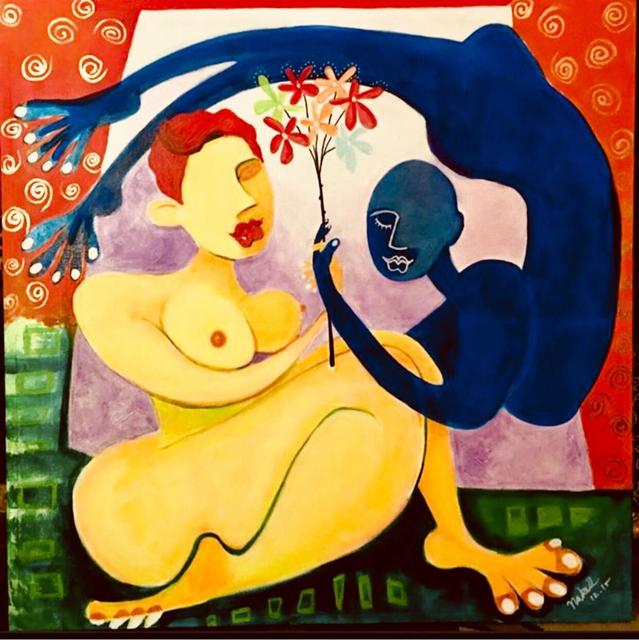 "I Only Have Eyes For You," ©copyright by Keith Mikell 2020 published by permission.
Click on the image to go directly to keithmikell.com

I Only Have Eyes For You

In a real sense all life is interrelated. All men are caught in an inescapable network of mutuality, tied in a single garment of destiny. Whatever affects one directly, affects all indirectly.

I'd been wanting to contact Keith Mikell for a long time. I am one of his 4,000+ friends on FB, we have one mutual friend, but I have been a devoted follower since he published his "I Miss Obama" image of a young girl, her mouth wide open, screaming. His paintings are color saturated, meticulously executed, whimsical and life-affirming, reminiscent of Romare Bearden, Picasso, Matisse and Chagall. When he recently posted an image titled, "I Only Have Eyes For You," I knew I had to interview him. I needed a break from the pandemic and all the bad news every single day. Isn't art, all art—written, visual, dramatic, musical—an antidote to despair? The answer to this rhetorical question, dear reader, is yes.

So I sent Keith a message on FB. He replied right away and we talked for a good long time on Thursday, a mere three days after Floyd George was murdered in Minneapolis. Why is this relevant?  In a week of brutal violence, surrender of our resistance is dangerous, as life is now bifurcated into the living and the dead, the righteous and those who have fallen. And I mean this in the biblical sense. Indeed, a Catholic friend of mine has said that the current resident of the White House is not the devil, he's the anti-Christ. To continue the analogy, so is George Floyd's killer. And though revelations, accusations and rage abound, what is valuable should be clear, if only we could understand that history is written as we speak.

Therefore, today, let me celebrate the transcendent work of an African American artist and dedicate this blog post to all the black men who have been murdered by the police in recent years. If this had been Keith Mikell's fate, he would not be making his art today. He would have been lost to us.

South Central Los Angeles is not a privileged neighborhood, and Keith Mikell is not a child of privilege. His father died before he was a year old and his widowed mother never married again. She worked in the cafeteria of the local elementary school that Keith attended, and saved the first painting he did at the age of eleven—of Jimi Hendrix—in a plastic bag at the back of her closet. She was consistently proud of him as he drew at the kitchen table with his good friend and neighbor, Ron Lewis, who Keith credits for inspiring him to become an artist. "I sometimes stole her lipstick to get some color onto the page," Keith says. Art supplies have always been expensive. So what's a poor, artistic child to do?

His mother lived to see both boys become men, Ron a graphic designer, Keith a successful painter after graduating from the prestigious Otis Parsons School of Design. For a while he supported his art and his growing family with a job at UPS, but the last five years have been different; his art has sold.

I suppose an artist's personality isn't always evident from his work, I couldn't argue that. After all, Picasso was both a genius and a misogynist, cruel to the women who modelled for him. Yet, somehow, I knew from his work that Keith was going to be easy to talk to and  generous in his offer to agree to a conversation with a stranger, albeit a journalist.

Reflecting on his origins, he remembers that his mother would often doodle and that he has two successful animator cousins—so perhaps the gift is in the genes, but the discipline is an achievement, it's intentional, and an example for us all.

And though Keith is affected by the struggles of our time and all its suffering and challenges, he approaches his creative projects with a light-hearted spirit. "I try not to dwell too much," he says, "it's a pothole in my creative process." He collects images, he reads and reflects on the writing of Princeton professor Michael Eric Dyson, he listens to a lot of music, he sketches out rough ideas, he sustains his Romantic impulse. "I Only Have Eyes for You," is a gift to his then girlfriend, now wife, Rita, who was upset by Keith's "flirtations" with other women. In his effort to reassure her, he painted a love letter, and a masterpiece.

I appreciate the opportunity to chat with you and honored to be the focal point of this piece, thank you Carol!