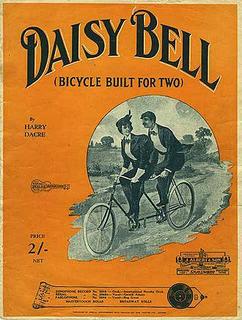 "Daisy Bell," with its line about a bicycle built for two, inspired by Daisy Greville, Countess of Warwick, one of the many mistresses of King Edward VII. Sung by Edward M. Favor and recorded by the Edison Phonograph Company on brown wax cylinder in 1894 can be heard on Wikipedia.

Better to love your country with a broken heart than to love it blind.

It was a cool, early summer Sunday and we'd decided to search out a solitary fishing hole, not for me, I don't fish, but I was going along for the fresh air, change of scene, and mountain vista. We were loading the car, masks on, as the cars in the lot are in close proximity and some of our neighbors have started to party, exiting their apartments without masks, blasting video games and music, and drinking lots and lots of beer, the re-cycling bins filled to overflowing. Not everyone living in this apartment complex is young or careless, or young and careless, but the few who are make me nervous. The strict, albeit unenforceable lockdown protocols worked for a while, but now have loosened throughout the town, I'd say, as we entered Phase 2 re-opening this week. For those of us in the "vulnerable" population, it's an even more dangerous time. Not fun at all.

I felt them behind me as I was loading the trunk, my husband already in the car, two unmasked well-dressed athletic bikers on a golden bicycle-built- for-two tandem bike. On a normal Sunday I would have chit-chatted about where they were from, where they were going, and asked what it was like to ride a tandem bike.

They were lost, looking for Ohioville Rd. They were far from Ohioville Rd. and it would require some explanation. I asked them to back away, give me some space, but they were unsteady, falling over, and laughing so hard they couldn't pay attention to physical distancing. I backed away and tightened my mask, but not fast enough, I told my husband later. I was skittish even though I knew that the breeze off the ridge and my mask was protective. It was the attitude that got to me. These were visitors from another world—young people having fun on an early summer Sunday—and it's not my world anymore, and not just because of the generational divide, though that is even more significant these days. The reminder of our vulnerability and their youthful entitlement made me angry and resentful. But I remained polite and gave them very specific directions—out to Main St., hang a right, then straight down Rte. 299.  Then I got parental and told them it was a busy road, they should be careful, and praised them for wearing helmets. So many conflicting emotions in that short encounter. It was a relief to get into the car, our safe isolation chamber, and to drive and drive and drive. We left the town behind, and we left the party behind. Governor Cuomo had already warned us: if the transmission numbers go up, we shut down again. There have already been 25,000 complaints of violations of re-opening protocols, particularly by restaurants. Indeed, with that amount of reported violations, how can re-opening be sustainable until we have a vaccine.

We are giddy with the prospect of restored freedoms. We cannot help ourselves, it is in our nature to move freely, to embrace our loved ones and, in these United States, to continually question authority and renew ourselves with fresh experiences. If we are young and eager and energetic, the containment of freedom must feel painful. Admonitions to protect elders and those with underlying conditions, to even protect one another—the virus can be deadly to young people and children, too—don't work forever, it seems. I'm at a loss about what to do or say to those that challenge the rules in my presence other than: please, give us some space, wear a mask, the pandemic is not over.

The mask wearing is working! ! It's scientifically proven. But we all must do our part. I am with you Carol, as one of the elders in our society in the age of Covid 19, I'm worried that the excitement of reopening may be the reason to shut down yet again.