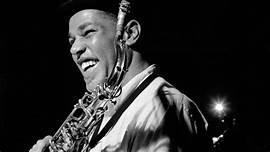 A young Dexter Gordon. Always happy to be playing his saxophone.

Jazz to me is a living music. It's a music that since its beginning has expressed the feelings, the dreams and hopes of the people..."

I've been listening to the tenor saxophonist Dexter Gordon non-stop since the COVID-19 shelter-in-place began. We have a couple of things in common: his dad, a graduate of Howard Medical School, was a physician, and his mom, Gwendolyn Baker, was the daughter of Captain Edward Baker, one of five African American Medal of Honor recipients in the Spanish American War. Accomplished, educated, upper middle-class parents, one of whom was a doctor; both of my parents were doctors. I wonder if Dexter Gordon's parents were shocked when he decided to become a musician and tried to dissuade him from such an uncertain profession. I know that my parents were skeptical of my ambition to become a writer, until I promised I'd also get a teaching credential.

Gordon was an expat for many years, not in London as I was, but in Copenhagen. Why did he decide to leave America? Racism? Opportunity? Love? Had we ever met, I think we would have had a lively conversation about becoming expats in a Europe enamored and supportive of artists, writers, actors and musicians. Even in lean times, and no matter the party in power, the arts still are subsidized in Europe.

I fell in love with Dexter Gordon's music long before I knew his biography and, in a way, I suppose, the biography is not important now, it's the artistry that's sustained his fans and his reputation. As Dexter Gordon's instrument comes to life, I hear his voice, his signature and his stories. He never fails to inspire me.

I began listening to jazz on the radio when I was in high school. There was an FM station out of New Jersey that played jazz 24-7. Deep into the night, the rest of the household asleep, the radio on the sill by my pillow, I listened and contemplated my emancipation as a young woman. I kept the volume on low, drifted off to sleep to jazz and woke to jazz. I don't remember if there were commercials, or not, or what the call letters of the station were, or why all my friends were listening to Rock & Roll instead of jazz. I liked to dance at parties, of course, but found most of the music boring and predictable. I liked Sam Cooke—his gospel background and sound was close to jazz—but hated Presley, though I knew that Presley and Cooke were friends.

My first boyfriend was a singer and a jazz aficionado, though he wasn't a jazz singer; he sang folk music. I tried to sing with him and even had a short, embarrassing stint as a folk singer myself in a coffee house in Boston, where I also waited tables. But what's most interesting to me now is how universal and lasting jazz is, and probably always will be. Decade after decade, it never fades, it's classic, and continues to speak to us—in times of joy, in times of sorrow, and in times of struggle.