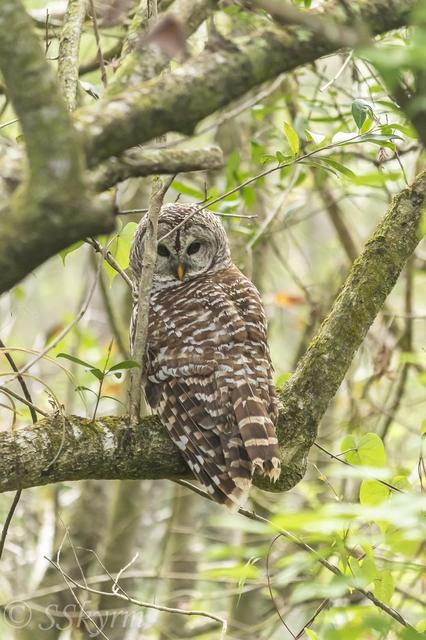 Photo of a Barred Owl © copyright Susanne Skyrm 2020, with thanks. In Greek mythology, Athena, the Goddess of Wisdom, had an owl on her shoulder whispering into her "receptive" ear. This watchful bird of prey is patiently waiting as we evolve--much too slowly-- into more civilized creatures.

Here I be. Not for long, but here I be. In sensing her mortality,

we sensed our own.

Why does no one take you aside and tell you what is coming?

It was my mother's 93rd birthday. I was driving up the Merritt Parkway listening to my favorite jazz station and enjoying the turning leaves when my sister called from the emergency room at Norwalk Hospital. After a recent fall, and a hairline fracture in her spine, my mother was in a lot of pain. She had pressed her Lifeline button and allowed the paramedics to take her to the emergency room. They had dosed her with two shots of morphine and released her. Like the leaves, my mother's long and interesting life had turned.

When my stepfather died, we wondered how she would cope. Surprising all of us, she began to live out some of her dreams. Without a man, she was free, free for the first time in her life and living alone, happily, not in Vienna, the city of her birth, but in America where she felt not only free but safe. She liked to be messy and so she was messy. She liked to read into the wee hours and sleep late, so she read and slept late. She ate what she wanted when she wanted. She flirted with an admirer, a physician colleague, who wanted to move in with her. She'd had enough of caretaking and said no to him. She loved her house and wanted to live alone in her house. She was affluent and healthy, had many friends and interests, loved to travel, joined clubs, voted in every election, read the NY Times cover to cover every day, doted on her grandchildren, remained robust.

But not on this day, her 93rdbirthday. When I got to the house, she was in bed. Neither my sister nor I realized how dire was her despair at being immobilized. "Only last week," our sentences began. Now our mother was agitated and hallucinating from the morphine; they had given her too much for her small body. There was no question of going out to a restaurant and a movie to celebrate her birthday, our original plan, and I knew I would have to spend the night. But she recovered and went on to live another six years. If she'd been alive during COVID-19, taken a fall and ended up in the ER, who knows what would have happened. Certainly, she would have been parted from her family, and we would have lost her forever.

Old in America. It has certainly taken on a complicated significance during this pandemic. Old means vulnerable, old means senior hours at the grocery store and mandatory masks, no discussion, and physical distancing, no discussion, and hopefully no emergencies requiring hospitalization. Dan Patrick, the Lt. Governor of Texas, said he'd be perfectly willing to die, aged 70, if it meant that the young, less at risk Texans, could return to work to get the economy going again. Tracking the surge in Texas this week, and the frontier individualism of its citizens outside the "blue" voting cities such as Austin, Dallas, and Houston, he may get his wish. Except that many young people may also sicken and die, not to mention the state's essential and front line workers, as the virus finds its level.

In many countries, the elderly are revered for their wisdom, and protected from harm by compassionate governments and extended families. They are not shoved into nursing homes to live solitary, attenuated lives, or told by their politicians that they are expendable.