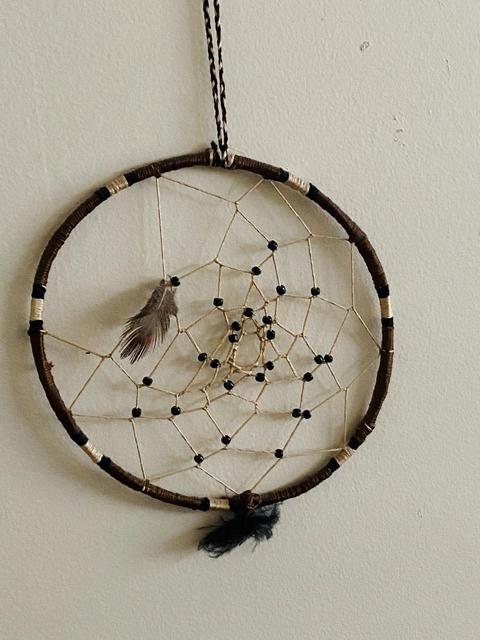 Photo of a Homemade Dreamcatcher ©copyright by Carol Bergman 2020

Dreamy Sex in a Plague Year

The things you think are the disasters in your life are not the disasters really. Almost anything can be turned around: out of every ditch, a path, if you can only see it."

-Hilary Mantel, "Bring Up The Bodies"

I dreamt I was meeting a Cuomo for a tryst in a New York City hotel, re-opened for government officials. But there was a problem: I couldn't remember which Cuomo. Was it Mario—no he's dead—or Chris or Andrew? Either one of those Cuomo boys would be okay by me. The dream ended before the tryst began, however, and when I told my husband of many years about it, he broke into hysterics and said, "New York Loving. That PR slogan sank in." Then he passed the anecdote along to his table tennis group on a group message, and they added to the riff with sexy dreams they were willing to share, or made up, and we continued laughing for a good long time, the blood oxygenated, our spirits raised.

Boy, do we need this! Not to mention the satisfaction of baking a good loaf of bread. I admire all the Facebook portraits of loaves. Bread, the staff of life. I don't bake and I hardly cook, recipes are lost on me, I live on salads and scrambled eggs, some tofu, and once-a-week, for the omegas, a can of sardines. So, I couldn't get over-excited when my husband announced he was going to buy a Ninja—an indoor barbecue-- which, by the way, he reassured me, also can grill vegetables. Okay, I'd seen the ad on TV. On the first day he used it he air-fried French fries with parmesan cheese and parsley—that is a recipe, now you have it—and they were completely delicious. Not only dreamy dreams, but dreamy food.

We are confused creatures, and we become even more confused when we are under siege. And we are under siege. Indoor barbecues? Really? A friend sent a video of two guys walking the boardwalk in a Southern California town. One of the young, buff guys was carrying a sign, "Free Masks," and the other had a box loaded with free masks. They were dudes, they were friendly, but it made no difference. Not only was their offer declined, it stirred hatred, abuse, and physical threats. I sent it round. "This explains a lot," I wrote, "and it is also horrifying."  An English psychologist friend replied, "What is wrong with your educational system?"

Finally, the lesson of the dreams and fantasies with which I began this blog post have come to rest in a different kind of desire: an end to vigilance and restraint, a continuing appetite for life, a good meal with friends sitting shoulder to shoulder, a long embrace with loved ones on faraway continents, and a smart, empathetic president.