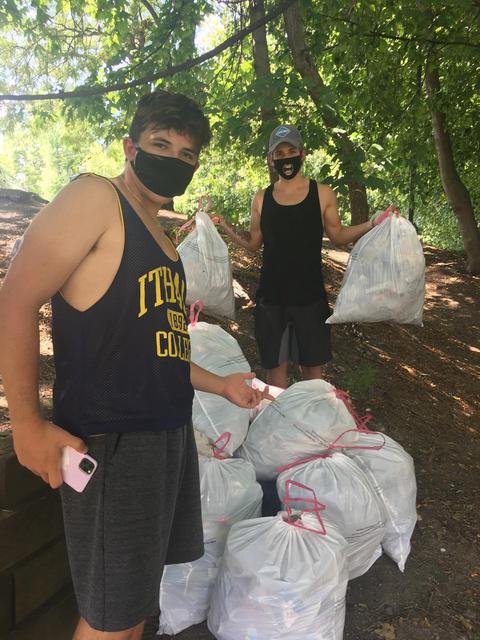 What We Choose to See

I suppose the shock of recognition is one of the nastiest shocks of all.

Every blade of grass has its Angel that bends over it and whispers, "Grow, Grow."

Andrew Geher and friends are cleaning up a dead zone, as deep and dark as a pit, cavernous and hidden, behind the local MacDonald's on Main Street in the small town where I live, New Paltz, NY.   It's an unofficial dumping ground and, possibly, a homeless encampment. In the past that would have been hard to believe in this affluent town, less so now that the pandemic has decimated so many jobs.  Andrew was walking by the site with his friends, a walk he's made often, but this time he saw the mess. This shock of recognition—the realization that our landscapes as well as our bodies can be compromised, trashed, or destroyed—stayed with him.

"I'd had a quiet, introspective few weeks when classes were suspended in the spring," Andrew told me in a phone conversation. A performer specializing in musical theater, going silent could have been especially difficult, but Andrew relished it. Both his dad and his sister had come down with COVID-19 and had to be quarantined in their respective rooms, both were very ill, though not hospitalized. They recovered, but it wasn't an easy time.

Still in his junior year of high school, Andrew didn't have his driver's license yet so he made plans with friends to walk masked and distanced around town, a safe way to get out and hang out.  Teenagers talking and walking. And then, one day, they passed the site and Andrew decided he'd organize a clean-up and posted an invitation on the community Facebook page. In addition to a cohort of personal friends, about a dozen of the local citizenry showed up, young and old, including Andrew's dad who was hauling a couch up a steep embankment when I arrived on a warm day in August.

Life for all of us has changed beyond all our imaginings; we all have been afflicted and challenged in particular ways.  Andrew and his friends will be entering their senior year of high school on Zoom, so the initial clean-up and a spin-off project is a give-back to the community, a broader, ambitious activism, and a way to stay sane and connected during the still difficult months ahead.

On his new website,  donthurthearth.com,  Andrew says that he hopes to inspire his generation to be part of the solution, not the problem.  He deserves encouragement, support and applause.