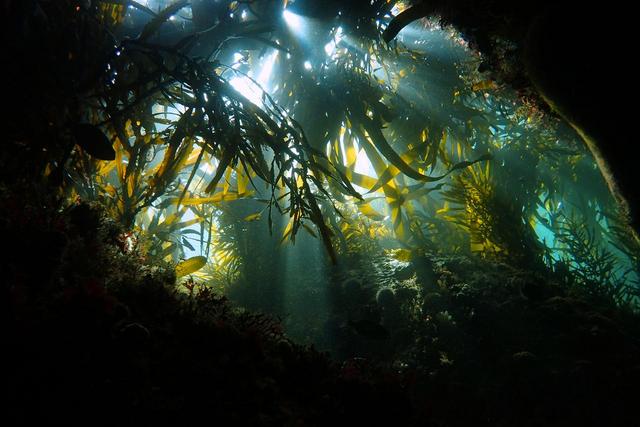 The oldest, easiest to swallow idea was that the earth was man's personal property, a combination of garden, zoo, bank vault, and energy source, placed at our disposal to be consumed, ornamented, or pulled apart as we wished."

Lewis Thomas, "The Lives of a Cell: Notes of a Biology Watcher"

As outdoor swimming is over for 2020, and indoor pools are closed for the duration, I have—virtually—immersed myself in a nutrient-rich kelp forest off the coast of Capetown, South Africa, and the faux floating G gravity of actors on wires –the wires digitally removed—inside a space module catapulting to Mars in the Netflix series, Away. But it is the kelp forest in the award-winning documentary, My Octopus Teacher, that has imprinted on my dreams and daytime reveries.

The Atlantic off Capetown is known as the "Sea of Storms," so fierce is the ocean on the southwestern coast of the African continent, home to one of the biggest kelp forests on the planet. Craig Foster's family had a bungalow on that shore and his diver parents put him in the cold water when he was three-days-old. Amid a successful career as a documentary filmmaker, and a period of burnout and depression, he decided to return to the site of his childhood pleasure and curiosity to immerse in the healing primordial waters. He'd just been filming the indigenous trackers in the Kalahari Desert and was inspired by their gifts and reverent relationship to habitat. He began to explore the kelp forest with a similar reverence, tracking its abundant life underwater, at first without his camera, and then with his camera. Years passed and he was diving every day, without a wetsuit, without scuba gear, to become more amphibious, he explains in the narration. Each dive in the shallow water lasts about two minutes—and  in 2015, on one of these daily forays, he discovered an octopus. His evolving relationship with this intelligent short-lived, "liquid" animal became a collaborative film project—his son and wife, his friends, professionals—culminating in a Netflix release, and The Sea Change Project, an environmental conservation group.

I was so smitten with this film, and all who worked on it, that I messaged Pippa Ehrlich, one of the directors and cinematographers. I woke up to her replies the following morning. The production company has been inundated with requests since the film was launched, and yet she took the time to answer my questions, for which I was grateful.

"Like all ecosystems the kelp forest is facing a myriad of threats including plastic and chemical pollution," Pippa told me in our email exchange when I asked about environmental degradation of the forest. Darwin did not mention pollutants in his reports from the Galapagos in 1835, but he gave us fair, passionate warning:

Amidst the leaves of this [kelp] plant numerous species of fish live, which nowhere else could find food or shelter; with their destruction the many cormorants and other fishing birds, and otters, seals, and porpoises, would soon perish also …

What did Darwin know, what did he see, that some still refuse to know, see and understand? Everything. It seems incredible, almost tragic, that his scientific prediction went unheeded. Yet, it has. I am consoled, at least, that The Sea Change Project  is looking after the kelp forest a continent away from where I live, and that Pippa, Craig, and the rest of the crew of My Octopus Teacher, have used their storytelling gifts to tell an enlightening, inspiring and entertaining personal story. Find more information  on the website: https://seachangeproject.com/

Yes, what a wonderful documentary. And how refreshing to see Craig, as first-person narrator, presenting with such authentic humility..