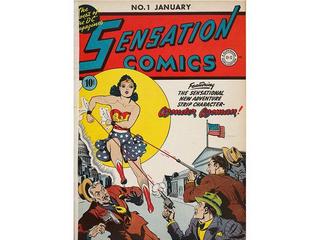 The first issue of the Wonder Woman series released on January 1, 1942.

I have followed Jill Lepore's career since she began writing for The New Yorker in 2005. I read her book, New York Burning, about a 1741 slave uprising in New York as I researched enslavement in New York City for a novella I was writing. I am now reading These Truths: A History of the United States published in 2018, written before Trump's regime was in place, but before the pandemic. Yesterday, I listened to Professor Lepore talk about the pandemic—and much else— in a City Arts Lecture podcast. It was delightful and informative. Did you know, dear reader, that she wrote an essay about breast feeding? (I missed that one but will look it up.) A professor of history at Harvard, she is a non-academic academic. She doesn't hold history at arms-length, or pontificate, or instruct; she is not ideological. She follows her curiosity into a subject and never loses her personal voice or point of view, and she is unapologetic about her point of view. "The work of the historian," she says in These Truths, "is not the work of the critic or of the moralist; it is the work of the sleuth and the storyteller, the philosopher and the scientist, the keeper of tales, the sayer of sooth, the teller of truth." Engage her in informed conversation, but please don't interrupt her, slow her down, or try to assassinate her. She will not be silenced.

I minored in American History when I was in college, and except for Hannah Arendt, who was a political scientist, not a historian, rarely encountered a female academic of note—not in the classroom and not in books. Sadly, there are still more men than women on my history bookshelf though there are plenty of women biographers. And then there is Jill Lepore. Her preeminence is fitting as we are about to elect the first woman Vice President, Kamala Harris –say her name. The thrill of this historic occasion is amplified by the Senator's ancestry. Not only a woman, but a woman of color. I may not agree with all her policy positions—fracking, for example—but I'll swallow that for now as we celebrate this accomplished woman's ascendance.

Any beginning in a particular historical narrative, says Lepore, also has an end. It's important to remember that, not to lose hope. The story of Trump's mis-election and removal from office will be documented and analyzed until it becomes the past, and we move on.