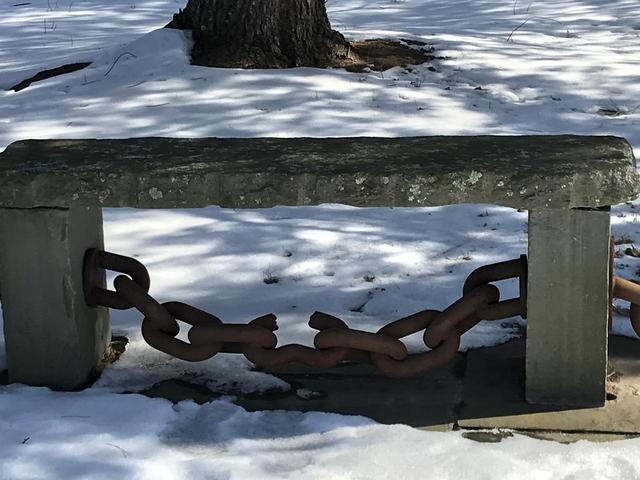 The Memorial Bench by Craig Shankles, a Huguenot St. resident and professional sculptor. He researched the history of enslavement in New Paltz and was horrified. "I wanted to do the right thing," he told me. The bench was his first memorial.   http://www.stoneandsteeldesigns.com/
Photo © copyright Carol Bergman 2020

One in five New Yorkers was a slave…They dug the roads, and their own graves at the Negro Burying Ground.

-Jill Lepore, "These Truths; A History of the United States"

I had thought I would write about voting today, the turning up and turning out, the waiting on lines the first day of early voting, the patience, the conversations, the determination despite the persistent dangers of the pandemic, a celebration of hard-earned universal suffrage. But after returning home from a commemoration at the African American Burial Ground in New Paltz, I felt sad rather than elated, or sad and elated. Elated by the texts I was receiving about casting a ballot, sad as I walked down Huguenot St. after the event. We had stood near—or  on—a field of bones and ash, no more than a burial pit, covered by a verdant lawn, a tarmac road, houses, cars driving by too fast, bikers, peak weekend. It was not a comfortable sensation standing in proximity to abandoned unmarked graves except for a sign and a concrete memorial bench with a thick, broken metal chain, that was placed there twenty-years ago when a racism study group commissioned the work. The stone memorial bench has stopped me cold many times; it is a powerful image. I thought of my grandfather's grave in Vienna, which all through World War II  had been a mound without a stone, or even a wooden marker. My grandfather, who died before the round-up, was spared the cattle car, the enslavement in the death camp before the killing, and then the killing itself, all family connection obliterated in that not so long ago genocide.

The survivors of once large, extended Jewish families—including my own—are  forever scattered in a diaspora, not unlike the African slaves brought as chattel to the New World. Reparations for the latter are overdue. Families riven, and then reconstituted, or newly assembled, families without inherited well-tended burial plots, or inherited wealth, their ancestors thrown asunder into the ground, bones and viscera commingling.

The burial ground on Huguenot street has never  been excavated. Should it be now? Would it matter? How would descendants of the slaves feel if they had a voice in these commemorative decisions in a town settled by Dutch, English, and French Huguenot slave-owners?  What would they say? How would they want their ancestors who labored and suffered here remembered? Is the commemoration for them, for the descendants of the slave owners, many of whom still live in New Paltz, or for everyone?

This is a thoughtful piece and I really like the power of the word "riven", one we don't come across too often.

Many thanks to both Jerrie and Larry for reading the post and commenting on it. I found myself identifying with the enslaved bodies thrown into the pit rather than the slave-owners, and it felt awful. I believe this is the empathic response memorials should evoke. In order to make a change, we have to feel the pain of the past.

Carol, this is indeed a moving piece. So many important considerations must be made when reconciliation is involved. Canada is not moving very quickly toward the much lamented reconciliation with our First Nations; I sincerely hope the state of New York is doing better in its efforts. Your photo says so much. Around the world we have chapters of history that have shaped us all. Let's hope the next generation moves in the right direction by acknowledging the need to reconcile first - not an easy task.

Thank you, Jane, for a Canadian perspective. Often, on the national level, there are vested interests that prevent efforts at reconciliation. And thank you Zuleika, a professional photographer in the UK, for the compliment about the photo. That made me smile.

Those of us of a certain age were schooled about slavery on southern plantations, never realizing that slavery existed in New York State until 1827. The Dutch imported slaves to help build their New Amsterdam colony and the Huguenots of the Hudson Valley were also prominent slaveowners. Interesting that these two religiously persecuted peoples who fled Europe, engaged in slave owning practices themselves. While New York may have been the first state to enact a law insuring total emancipation in 1827, at the time of the writing of the US Constitution, every state legally allowed slave ownership in the new nation which prided itself on the belief that all men are created equal. Gives one pause for thought about what equality actually meant in those times.

Thanks for your comment, Eric. The continuing struggle over the legacy of slavery remains unresolved. The reparations movement will pick up speed after the election. It echoes throughout the criminal justice "system," racial profiling, redlining, and beyond. In the meantime, local communities initiate various restorative justice gestures, and sometimes more than gestures. I am in the midst of Lepore's "These Truths" which carefully explicates the thread of white supremacy in our troubled history. She's a scholar I trust.