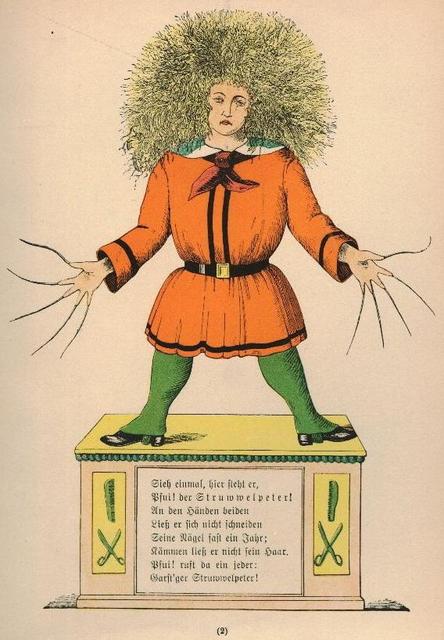 Until, in the end, it seems that he has heard our laughter, and all at once his stupidity turns to wickedness…

Jenny Erpenbeck, " My Favorite Fairy Tale," an essay in "Not a Novel; A Memoir in Pieces."

The ending of a catastrophe does not remove from the human repertoire the underlying motivations that gave rise to these sentiments.

Day 3 after the Another Historic Election and for some reason I am thinking about Struwwelpeter, the 1845 German children's book by Heinrich Hoffman. Why did my father have this book on his shelf? It was terrifying. In one story, a girl plays with matches, sets herself on fire, and burns to death. In another, a naughty child is dipped in black ink. But the story about Konrad was the worst for me.  That once sweet child sucked his thumb, as did I. His mother warns him, but he can't stop. Along comes a tailor who cuts off his thumbs with giant scissors.

This book was never intended for me, gifted to me, or read to me; it was a relic of my father's European childhood. He must have brought it to America with him. I found it one morning when I was up early, snuck it off the shelf, and read it furtively before anyone was awake. And I never said a word about my transgression, if that is what it was, to anyone, least of all my father, a collector of Egon Schiele's pornographic images, some of them of underage girls. Fortunately for me, I did not live with my father full-time and he didn't have joint custody, just visitation rights. Every hour in his presence was an agony for me. Every "moral" instruction I received from his wife was an agony for me. She had red hair just like Struwwelpeter—a Struwwelpeter  Family writ large. Yet this cruel book, and the characters in the book, are still considered "classic" today, a precursor of the comic book and the graphic novel.

Is it my imagination or does Donald Trump resemble Struwwelpeter, the naughty boy-child of an abusive father who becomes a teenaged delinquent, and an adult criminal in constant need of "correction?" This may be true, or not true, it is of no consequence; it is only a thought passing through this writer's head. In any event, we've reached the denouement of an amoral, demented man's regime in Washington, the end of a catastrophe, which does not mean we are relieved of the responsibility for what has happened, or the work of restoring sanity to a more just society.

The only thing Hair Trumpf doesn't have is a little black, rectangular moustache. Your blog is schpot on!

Let's hope that THIS Struwwelpeter will get very rapidly off the shelf !

powerful and disturbing blog indeed. Sending virtual hugs to you.