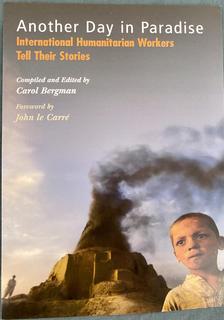 At a time when so many have lost their moral compass, I turn to authors who are grounded in ethical and humane storytelling, writers such as John le Carré, whose genre fiction reads like poetry, or philosophy. Though I never met him personally, I have a connection to him I hold dear. He wrote the foreword to my book, Another Day in Paradise; International Humanitarian Workers Tell Their Stories.

Both my agent and publisher had mentioned that we needed a "name" to platform the book. They were searching for someone suitably high-profile while I was still gathering and editing the stories, not nearly finished by the time I was scheduled to attend training and war games at the International Committee of the Red Cross in Geneva. It had been arranged by the ICRC publicist, a Brit. He explained that I was expected to converse in French while on the campus, the diplomatic lingua franca, and I was rusty. So, when he picked me up from the airport, I prevailed upon him to speak English for the duration of our drive. "But you'll have to introduce yourself in French." he said, "and explain why you are here." Indeed, I was hoping to find an ICRC worker's story for the book and went on to explain the search for someone who would write a foreword. The publicist knew John le Carré's agent in London, Curtis Brown, which—stroke of luck, I thought—had also been my agent in London before I moved back to the United States.

In retrospect, these six degrees of separation made no difference, as David Cornwell, aka John le Carré, was not a man who seemed to care about networking, inner circles, and privileged connections. He had been active in humanitarian and human rights initiatives for a long time, an outspoken advocate, and as soon as he saw the proposal for my book, he agreed to write the foreword. It arrived to deadline, not a comma out of place. Together with a cover photo by the revered war photographer, James Nachtwey, the book was off and running on every continent. Neither man asked for much money. Their contributions to the project, which took two years of my life, were a gift. Perhaps they understood, before I did, its potential value and longevity.

When John le Carré died, I felt a great loss. I had read his autobiography, The Pigeon Tunnel, not so long ago, and had been thinking about his elegant acceptance of the prestigious Olof Palme prize just last year. He had donated the $100,000 prize money to Doctors Without Borders and, aged 88, gave a heartbreaking speech at the ceremony in Stockholm. What a piece of writing, what a beautiful man.

I was disappointed when he didn't attend the launch of the book in London in October 2003. So many years ago, now, yet it feels like yesterday that I awaited his arrival, the press in attendance. His agent came instead, with apologies. David was in the field researching his next book.

Scroll to the bottom of the press release for a link to the acceptance speech:

A lovely tribute to a wonderful man. The world feels his loss.