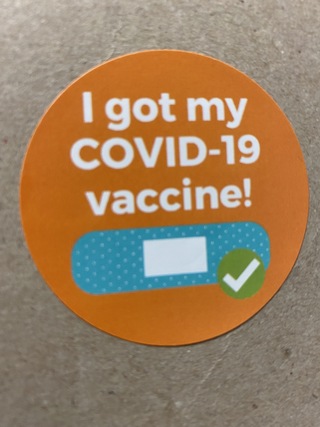 With thanks to the CDC for this sticker.

AND THEN, ONE DAY, THEY WERE VACCINATED

Dedicated to all the front line workers, particularly Dr. Stephen Goodman in San Francisco, and the caring employees of the Institute of Family Health in New Paltz, NY

A friend just wrote to say she'd lost her best friend to COVID. Another (scientist) friend—let  me call him G in the Kafaesque manner—that  he'd had the virus in the spring, tested positive after his physical trainer called to say he was positive and another client was positive. G never had a symptom, "not even a sniffle," he said.  He quarantined for ten days, re-tested negative, and continued his shut-down life.  But he was left with a lot of questions, the kind of questions scientists treasure. He is both fascinated and horrified at the "success" of this virus, he told me. More than 50% of the spread is asymptomatic, therefore the rapid spread. The results of research into this phenomena will teach us a lot more, more perhaps then civilians need to know, or want to know, about deadly pathogens.  And now there is the new, virulent, more transmissible strain. "It's a footrace," Governor Cuomo tells us. Get the vaccine into our arms, stay vigilant. Well, we're trying. This week, an inauguration, and hopefully the start of muscular federal guidance and distribution of vaccine. Why the shortages? Why the scramble?

Meanwhile, still healthy, or recovered,  or asymptomatic Americans are queuing up for appointments to get the vaccine. If we can work the system, without gaming the system and jumping the queue, we'll be okay, our consciences will be okay. But what about the people who don't have computers  and can't work the system? Illness and death are great equalizers, but healthcare in the U.S. is not a great equalizer. Have we finally learned this lesson? Biden has already announced he wants to ensure "equitable" distribution, including prisons. It's a breath of fresh air.

These were my thoughts as I waited to get my first Moderna shot yesterday, together with ten other "eligible" citizens, including my husband.

A nurse explained the protocol. By our side on the floor, a lengthy print out about the vaccine, its possible side effects, a timer, and a card with a return date on the back, one month hence. "And we have all the vaccine in house," the nurse explained, to offset concern about shortages.  We received the vaccine in our upper forearm, all very simple and familiar except for those of us with allergies: we had to stay an extra fifteen minutes to make certain we had no reactions.

I perused the surroundings. "That huge black thing, is that the refrigerator?" I asked the nurse. She laughed. Was it the first laugh of her long, complex day? "That's a vending machine," she said.

I don't know why I was fixated on the vending machine, or why I would have preferred that it was a refrigerator. A better story, perhaps? More so, if it had broken down. My writer's brain was winging away.

I tried to relax. The thirty minutes "eyes on" monitoring for allergies passed without incident.

In the parking lot, I heard, "Carol, is that you?" It was my friendly neighborhood banker, Al. Fitting that I should meet him on VACCINE DAY!  If memory serves, and goodness it seems an eon, I began Virus Without Borders more than fifty chapters ago with Al as the central character.

Then, finally, I recognized his Queens accent.

He inched towards me. My impulse was the same. I wanted to hug him.