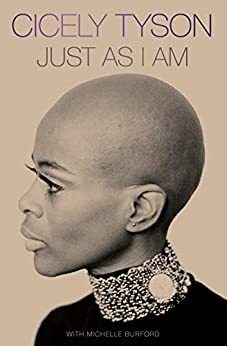 I am indeed Cicely, the actress who has been blessed to grace the stage and screen for six decades. Yet I am also the church girl who once rarely spoke a word… And here in my ninth decade, I am a woman who, at long last, has something meaningful to say."

From "Just As I Am" –Cicely Tyson's Memoir

The one-day memoir intensive at Gotham Writers' Workshop began early. I brought my breakfast, lunch and late day snack. I was dressed informally. Teaching is an aerobic activity for me and I sweat. It was spring, or maybe summer, sometime in the 1980's.  Please don't ask me the exact date; I'm not good with dates. Time passing, time immovable, a sense of time utterly distorted in the midst of this pandemic, impatience grating as the end approaches and then recedes with news of variants.

I had checked in with the admin at Gotham and was told that the room had been prepared for me—all of the chair desks in a circle. I remember that the room was bright, the light filtering through dirty schoolroom windows facing north. Gotham had not rented this space before so it was new to me. I left my belongings on a chair and went into the hallway to search for the bathroom. When I returned a woman was standing by the window gazing at the cityscape. I said hello, but she did not reply. Minutes later, as more students entered and settled, the woman remained standing by the window. I introduced myself, asked the students to introduce themselves, the usual routine, and I said to the standing woman, "Would you please take a seat." She turned to face me. A Black woman wearing over-sized sun glasses, a wig, a coat covering a slim, slight body on what would surely be a warm day. Camouflage.

"You will have to take a seat if you wish to participate," I said firmly.

So she finally took a seat but  still refused to introduce herself.

So I let her listen, but at the break, I went back to admin and asked about the woman.

"I know who she is. She is disrupting the flow of the class. I have to insist that she participate."

"Today she is my student and that's all she is. I've interviewed a lot of celebrities. I get the attitude, I get the fear of exposure. But not in my class."

No, not possible. I had to ignore her reluctance—or  was it resistance—and let her stay, I couldn't ask her to leave, I was told.

Lots of prompts and read-backs. She didn't open a notebook, take out any loose paper, or participate in the discussions. I tried to pretend she wasn't there. I hoped she'd just leave, but when I returned from a break she was still there, arms crossed, coat on, behind her dark glasses. Then it was lunchtime. She walked out, took all her belongings. Good, I thought, she's gone.

I left the building to get some air, went to the park, and ate my sandwich. I got back to the room early having told the students I'd be available to chat informally. And there she was again staring out of the dirty window. This time I walked up to her and stood next to her, shoulder to shoulder. "What's going on?" I asked.

"Okay, so look, if you are going to stay, you will have to participate. It makes the students uncomfortable, it's not right that you set yourself apart, and it's hard for me. Everyone knows who you are so you might as well take off those glasses. But when you are here, you are an aspiring writer and my student. You don't have to read anything aloud, but try to write to the prompt and say one or two things to the other students. I don't care if you leave, but if you stay, those are my rules."

I felt like a mom chastising a petulant daughter. I set the boundaries and she relaxed. I wished I had done it earlier.

Never too late. For the rest of the workshop, she wrote intensely and  spoke aloud ever so tentatively. That was enough for me. And I hope it was enough for her, too, that she had started her memoir, or that the idea and purpose of a memoir had been seeded in her.

When one thinks of celebrities, they envision people who wouldn’t stop to give you the time of day. Ms. Tyson lived in my mother-in-law’s building for more than 20 years. My wife and I would run into her in the elevator, the lobby, in front of the building, etc. One day, I even helped carry her suitcase half a block away to a yellow cab. She never short-shrifted our conversations, instead sometimes even extending them by asking us questions about our lives and activities. If one didn’t know she was globally reknowned, they would never have guessed. She was that genuine and down to earth. I’ll miss our unplanned encounters.

Makes me wonder how many other autobiographies you’ve been doula to.

Teach long enough, Max, and you, too, will have many doula opportunities.