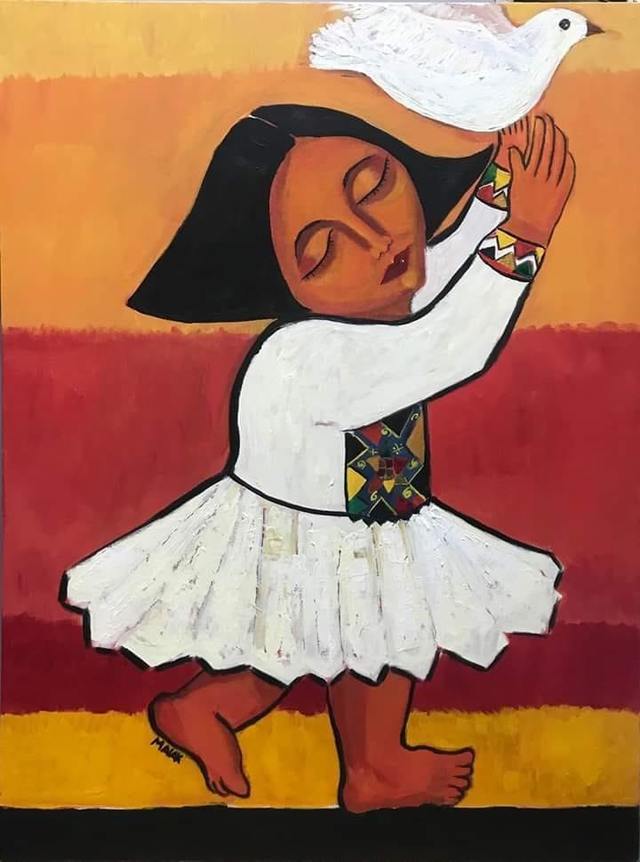 The Last Scene Before Flying With the Dove to Paradise.  ©copyright Malak Mattar 2021

Malak often includes a Dove of Peace in her paintings.

It isn't hard to do

Nothing to kill or die for

And no religion, too

Imagine all the people

Dedicated to all children growing up in war zones.

Malak Mattar, my young friend in Gaza, put up this FB post today: "I survived. I'm officially a four Israeli attack survivor by the age of 21."  But is this Le Fin, the end of this horror movie? Probably not.  Geopolitics, realpolitik, real lives underneath those falling bombs and rockets. Children in Palestine and in Israel and in Afghanistan growing up in war zones, suffering from PTSD, learning to hate, dreaming of escape or revenge. And what about the soldiers and flyers and bombers, what about their PTSD as they become yet more efficient killing machines?

Did the bombing in Gaza wipe out Covid? Of course not. But now that there is a ceasefire, the humanitarian agencies can get back in to do their work: house the homeless, provide medical assistance, vaccinate, even set up temporary schools and play spaces for the children.

I spoke to MacKay Wolff, a former relief worker for UNRWA, the UN agency set up in 1948 to serve  the Palestinians –and  Jews—displaced  by the war against the British colonial regime. "I hope they are using the 80 schools UNRWA set up as shelters," MacKay told me before the ceasefire. UN workers are tasked with protection—of everyone—to treat all those in need equally. It is not always easy, but that is what they are trained to do.

Gaza is flat, and unlike Israel, has no bomb shelters, my Palestinain friend Ahmad told me.  I had not realized that the terrain was indefensible, and was shocked to hear there are no shelters. In that case, I hope the Israelis are not bombing the schools, I thought. Did I say that thought aloud? I'm not sure. I was feeling distressed that day, and so was Ahmad. I knew that my Israeli cousins were safe, or safe enough, in shelters.

MacKay had written a story for my book, "Another Day in Paradise," about his posting in the West Bank during the first intifada. How many years ago was that? Too many. There are now 5.6 million Palestinians—the original refugees and their descendants—registered with the UN agency. How many refugees? Too many.

Strange that this very week the citizens of New York State began navigating without masks, enjoying freedom of movement and a renewed sense of safety. Most of us—if we have not lost a loved one, or our jobs, or have long term effects of Covid—are feeling positive, even euphoric, about our survival. I wish the same for Malak, her family, and all her wonderful activist friends. May they live in peace.