What Photographs Can Do 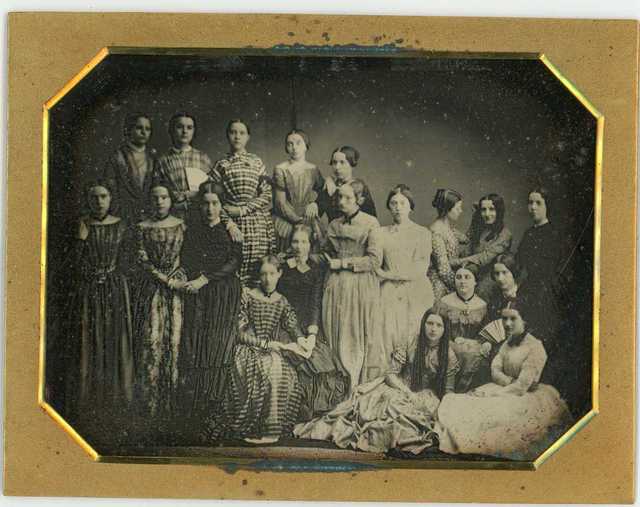 Half-plate daguerreotype of the Rutgers Female Institute, Class of 1848, located at that time on Madison Street, on the Lower East Side of Manhattan. Vintage slip of paper attached to case mat reads "Carrie Hubbell's Graduating Class at Rutgers–Carrie is in upper row–2nd from left hand with fan. Henrietta Piercy with long curls in right hand corner on floor."

"Reading" the photograph, it is interesting that there are no Black females. The school was the first institution of higher learning for women in New York City. Black women would have still been enslaved. CB


With thanks to Jeffrey Kraus for permission to use this image.

What Photographs Can Do

All photographs are memento mori. To take a photograph is to participate in another person's (or thing's) mortality, vulnerability, mutability. Precisely by slicing out this moment and freezing it, all photographs testify to time's relentless melt. -Susan Sontag, On Photography

A good snapshot keeps a moment from running away. -Eudora Welty

It's easy to like Jeff Kraus when you first meet him. He wears a ponytail, his features are soft, and his smile welcoming. And even though he lives at the end of a hidden, almost secret driveway, his house is light-filled and open. One of the pre-eminent collectors of antique photography, I had originally met him during a pandemic walk as we shouted our hellos from opposite sides of the road. He was sometimes alone, sometimes with his wife, Jo Ann. And, one day, as I was walking with my friend, Helene, who knows everyone in town and insisted on an introduction, we stopped to talk. Jeff's voice and gestures seemed familiar; I suddenly realized that I know his brother. Over these past difficult months, we continued to talk now and again, and got to know each other, as one does in passing.

I had studied the history of photography in graduate school and when Jeff told me about his collection, I couldn't wait to see it. We agreed that a post-pandemic visit to his house would be a day of celebration. Fully vaccinated, we made the plan. And there he was, and there I was, and there Jo Ann was, all of us unmasked.

I brought my two precious daguerreotypes with me to begin our conversation. Jeff opened them with the precision of a surgeon, his hands as long-fingered and elegant as an artist's. Separating the plated image from the matting and the case, both of which are significant to a collector, appraiser, or curator, he began to talk. Underneath the image there is often a browned piece of paper, he explained, which can sometimes identify the sitter or the photographer. More research then has to be done. "Circa 1850," Jeff said, about halfway through the daguerreotypes' 1840-1860  lifespan. 1850. Now that was a year, the year of the Fugitive Slave Act, ten years prior to the Civil War. My imagination and curiosity clicked. Who were these people who sat for their photograph, a vice-like device holding their heads still for the long minutes it took to achieve an exposure?

We moved on to his formidable collection filling drawers and blanketing the walls. It includes daguerreotypes in various sizes, tintypes, ambrotypes, cartes de visite, and stereoviews.

I was curious about his collecting impulse as my father was also a collector, albeit of paintings. Is it obsession, passion, greed? Is it a way to enter into a past life, a past world, to document historical moments, continue the process of gathering history into accessible stories? I suppose the answers are different for everyone. But what most collectors seem to have in common is the origin story of their collecting; it often begins by accident.

In Jeff's case, his father owned an antiquarian book selling business when he was growing up. Like all kids, he hung out, and was also asked to help out. If photographs arrived in the boxes of books, he asked if he could take them home. That was  the beginning of his fascination, and his personal collection, which continued during his years as an Executive Director of an HIV/AIDS service organization. Retired, he has been able to devote himself full-time to his avocation. He buys and sells, lends items from his collection to museums and film companies, and keeps a well-written blog.

I could have stayed for hours asking questions and perusing numerous files of photographs, each with its singular back story, all of them portals into another time and place. Historians savor such collections as amplifications of the written record; they "read" a photograph's nuances. But what if that historical record disappears? How will scholarship change, how has it already changed now that we only save our writing and photos to the cloud—or  hardware—that  soon becomes obsolete? How will historians retrieve our past?

I asked Jeff this question in a follow-up email; it's been troubling me for years. His answer was not consoling: "It will be basically unretrievable," he wrote. "History will be written as it was before the advent of photography. Whatever degree of objectivity we think exists will diminish, although of course photography is not objective, either in intent or content."

I hope he is wrong, that a technology will surface to ensure that our private collections—manuscripts, emails, photographs—are available to future historians to document, interpret and reinterpret our lives.

Interesting blog post. Imagine where we would be if there were no photographs or videos of the January 6th insurrection?

It's part of the reason for the #AddYellow campaign, the effort to remember those lost to COVID-19 or affected by the pandemic by adding something yellow to 4th of July celebrations and photographing the event.

Without all this documentation, the former guy and his minions would just pretend these things never happened.

So, as you say, we need ways to protect and preserve this vital documentation for future generations.

Really interesting Carol. For as long as I can remember I have kept a hard copy of all my photographs, (so much so that I pity my children having to sort through them when I am no longer here!!!) My present to them for Christmas is always an album of photos that I've taken (or that I have nicked off their posts on social media). I can't bare to erase any until I have at least saved them on external hard discs before making them into an album.