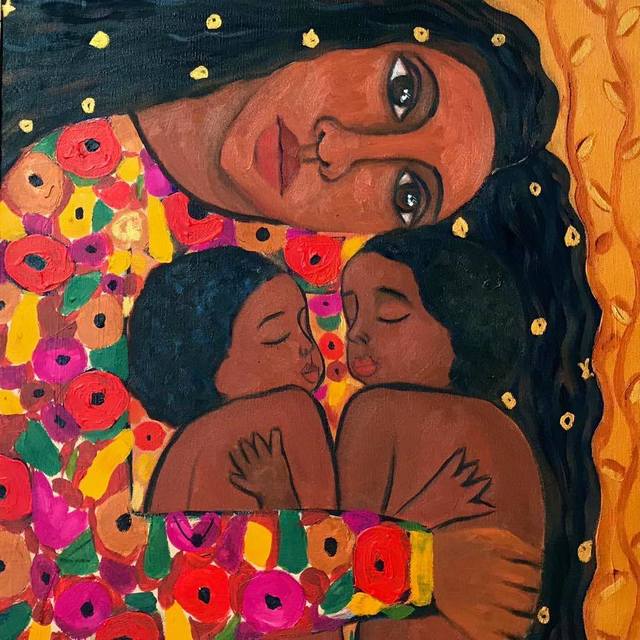 Click the image for a link to her art store.

I want to tear myself from this place, from this reality, rise up like a cloud and float away, melt into this humid summer night and dissolve somewhere far, over the hills. But I am here, my legs blocks of concrete, my lungs empty of air, my throat burning. There will be no floating away.

The word "unprecedented" surfaced out of  an anxious restless sleep last night. I wrote a poem in my journal out of this mood while I was still in bed. I didn't want to lose the inspiration. I can worry about everything, that is easy for me; writing is the centripetal force that grounds me. Not only is the American government abandoning an estimated 200,000 translators, workers, journalists— only all the gods know who else—they  are doing this so that everyone in the world can see what they are doing. Darkness visible.

Excuses abound: Covid at the American Embassy delayed the visa applications. That was a good one.

Watching the first episode of the series Unforgotten last night for the second time, the protagonist, a detective—what else these days—is struggling with a buried skeleton. Shall the police spend limited resources on a possible murder that is long ago history? Is moral responsibility so easily expunged? Certainly not if people are still living who are affected, the detective tells us. She's played by Nicola Walker, one of my favorite British actors. The script has an ethical center, a joy for any actor with a conscience to learn. It zings off the screen into our hearts and minds.

When does the past become the past? If ever? I thought of the slave trade, enslavement itself, and the reckoning that is efflorescing in literature and the arts. I thought of the catastrophic US departure from Afghanistan. A poet, or dramatist, or novelist will certainly remember and write about it.

Unprecedented, the word that surfaced in my anxious, restless sleep. I wrote a FB message to Brian LaGuardia, another soldier who became a relief worker. I thought he was in Kabul, but he was posting photos of Central Park—ducks in Central Park. R&R, visiting his family, he was safe, returning to the field soon to help the Rohingya refugees in Bangladesh. I remember the day Brian came up to me at an Another Day in Paradise book reading at NYU. He was just home from Iraq, and like Robert Séamus Macpherson, intended to segue to humanitarian work. He had presence, in the Buddhist sense, and I've followed him all these years on FB.

What accounts for people who have altruistic impulses? And for those who don't? Is there any corner of the world that feels stable and healthy right now? That has a humane government and health care system, beaten back the pandemic, donated extra vaccines willingly, quieted their white supremacist, nationalistic rage, emptied their jails of dissident writers and journalists, and committed to ZERO carbon emissions RIGHT NOW?

How we move forward to end war and hunger and disease and corporate greed when the pandemic is really, truly in the rear-view mirror will be inscribed in Heaven, or in Hell.

Carol, you are a gifted writer with extraordinary depth. As I watched the evacuation helicopters from Afghanistan, super imposed on similar videos from Vietnam. I retreated into a place that even radical acceptance doesn’t work. In Vietnam, during the evacuation, two of my friends who were the pilot and co pilot of a helicopter were blown out of the sky. Were they the last Americans to die in the war? I’ve never been able to become a “true” pacifist, but the wars throughout my lifetime have gotten me damned close to becoming one. How do the veterans of Afghanistan feel as they watch this go down? Loneliness and abandoned, but with a sense of incredible sorrow. They’re on your own. So few Americans went, so few understand… You mention, altruism-where does it come from? Maybe, just maybe, it grows from a seed inside all of us that can only sprout when there’s nothing else to hold on to? And when it blossoms, you look at it and say, “thank you, God or the universe or whatever-for showing me there is some light, after all.

Oh my goodness Carol Bergman what a remarkable piece. It says it all!

I can't identify a place that has it all right, with all the points that you mentioned at the end. Somewhere in Scandinavia? Iceland?