This Thanksgiving: Gratitude and Admiration for Courageous Writers 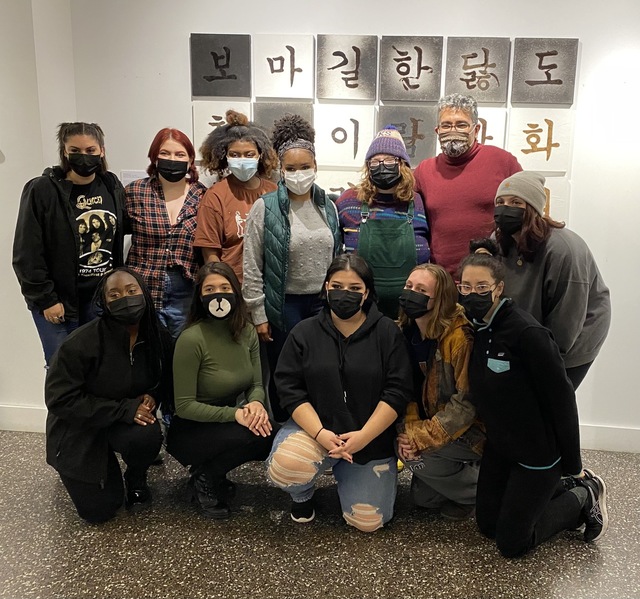 And above all else: we must look to our children.

They are the seeds of what is our potential

As a society. We can no longer blindly

Dismiss the wisdom they carry beyond

They are the vaccine, the hope, the revolution…

The world has already begun to devour us all

Whatever is left is up to you.

I waited in the lobby until the student performers emerged from backstage. The playwright, Tlaloc Rivas, was also there. It was the first time the play had been realized by performers on the stage, and though the audience was sparse in the SUNY New Paltz Main Stage last Saturday night, it was an important occasion, a text come to life.

I had talked briefly to Rivas after I introduced myself, and asked for some help pronouncing his Meso-American first name, but my presence was eclipsed by the students, all still masked as they had been on the stage, arms raised in anticipation of embrace as they shouted thankyous for the play Rivas had gifted them. They fell into his arms and then posed for a photo. I can't imagine that the script was easy to memorize, but they had done well with the long passages of rhythmic verse, inspired by Sophocles' Antigone.

Reading the production script a few days later I could see how the students had so readily attached to Rivas and his work, before even meeting him in person.  The play was inspired by the atrocities on our border during the Trump regime, Rivas explains, and is written to be spoken, appropriately by young people, it seems to me, the next generation, soon to graduate. They will be living with consequences of the ongoing border atrocity, among so many others.

"Strive in your casting to be as inclusive with regard to ethnicity, gender identity or expression, ability, religion, incarceration status, or national origin," Rivas writes in the stage directions. "Happy to work with any director, company, or university to accommodate to specific needs..."  As they continue to wrestle with the Eurocentric canon, plays not to be discarded but to be studied in the context of heightened awareness, the faculty committee that chooses plays every season at SUNY took Rivas up on his offer and his challenge.

How does a Mexican-American boy, raised in Baja, California by a mother and her six sisters, become an admired socially conscious playwright and theater professor with a profound knowledge of the classics? His trajectory was unusual and certainly an inspiration to students:  He delayed his college entrance to the University of California Santa Cruz  and  looked after his younger siblings so his mother could return to college first. "It's what Latino families do," he said. "We look after each other."  Later, he went on to earn his MFA at the University of Washington.

The determined, forthright women in his life are echoed in his writing. "Should I call you a feminist?" I asked during a telephone interview. We laughed, unsure if we can  still use that word given the rapid changes in the language of gender identity. And the play is bi-lingual. Though I don't speak or understand Spanish, the dialogue was so well contextualized that I understood everything and was ready to return to my own study of America's second language after abandoning it for French when I moved to Europe.

"There are members of the cast who do speak Spanish — and there are others who are making the effort to do so, just like any other project that involves Shakespeare/or accents," Rivas said in a statement he made to the Department of Theater Arts after an article in The Oracle, the student newspaper, complained about the casting of non-Spanish speakers.

The complaint in the newspaper was mis-guided and mis-reported; it has since been withdrawn and rewritten. Fortunately, Rivas's maturity, and the goodwill of the theater department, kept the rehearsals humming. Kudos to them and all writers and educators who refuse to be censored, silenced, or manipulated in the current politically correct environment, however we define it.

It had been a while since I'd been to a live performance. This was a good one. It's a masterful work, polemical yet mythic, a contemporized Greek tragedy about a despotic ruler and the imperative of resistance.

This was not only an unusual review of an amazing playwright and play but your usual beautiful way of capturing the spirit of the experience.

So glad to read about the play and your experience of it. I hope we can see it someday. Thanks, Carol!