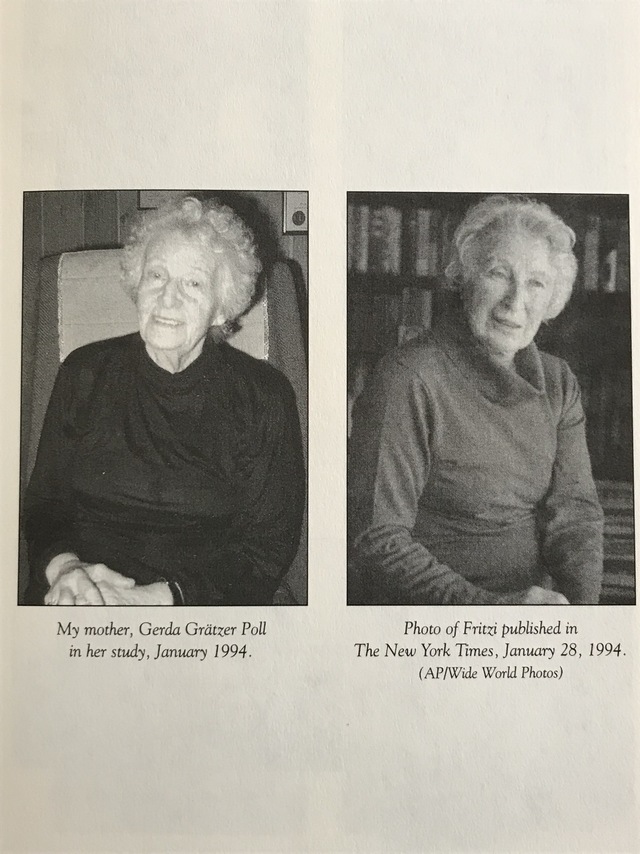 Two German-speaking Viennese women. My mother is on the left, our cousin, Fritzi Burger, the Olympic ice skating champion, on the right. The Kindle edition of "Searching for Fritzi" is available on Amazon.

Studying German in a Plague Year

History exists in a constant state of revision as we learn more about the present and the world that preceded it.

I was listening to a NY Times Daily podcast by a Berlin based reporter who spoke perfect English, but I also was understanding all the background German before it was translated. I know that we've all changed immeasurably during this past year, but I could not account for this epiphany, if that is what it was. I took a deep breath. It was hard to believe what was happening. What was happening?

There was a time when my brain and my heart would have shut down at the sound of German, or a German accent. I wrote about this sensory/cognitive dissonance in my 1999 memoir, Searching for Fritzi. As I was working on that book, I took a German language course at NYU because I truly wanted to "get over" this block, especially when encountering a young German or a young Austrian.

On the first day of class, when everyone stated why they wanted to learn German, I was mesmerized by everyone's stability and common sense. One person was an opera singer, another a business woman traveling frequently to Germany, another had a German boyfriend. My blood pressure was rising as I anticipated what I could say: "Most of my family were murdered in the Holocaust and I have a block…" My voice trailed away. The class and the professor went quiet. No euphemisms such as "perished" in that sentence; I'd long before abandoned any softening words. Then, at the break—it was summer, I remember—the professor, aus Salzburg, came up to me as I was munching on a peach and perusing a bulletin board. I was in a fugue state, very distressed, not really concentrating on the notices. She put her hand on my shoulder and said, ever so gently, "Are you okay?" and I answered, "No, absolutely not, but I will try to stay." And that's what I did: I stayed. When the draft of my memoir was finished, I sent it to this wonderful woman and we met for lunch. But I haven't studied German since.

Then came Covid, a surfeit of time, classes online, apps, more French, my second language since High School, amplified when I was living in London and traveling to France. I had never thought about German, or wanted to think about German and when I traveled to Germany I often wanted to leave as soon as I got there.

And then, suddenly, years later, in the midst of a plague year—is there a connection I wonder—I decide to study German, my parents' Mother Tongue. They spoke it all the time to each other, but never to their children, not unusual in an immigrant or refugee family.

I remember my erudite lawyer stepfather trying to convince me that Goethe, Heine, and Kafka should be read in the original. He had these books on his shelf if I ever wanted to study German and borrow them, he said. I never paid attention though I did read those classics in translation.

So, it's time, perhaps even past time, to take advantage of this gift: German is in my ear, it belongs to me and my heritage as much as the genocide.

A couple of terms ago, I had a young German in my NYU class. He traveled back to Germany to be with his family during the pandemic, but we've kept in touch. I can't wait to tell him my good news, to greet him in German, and perhaps generate a sentence or two.