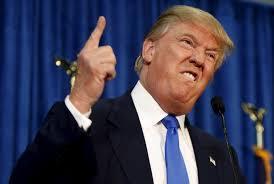 The Demagogue: his hair looks like a croissant, his mouth like Mussolini's.
“How Does a Nation Turn to Hate?” That’s a tag line on the New York Historical Society website this month. I went to see their small exhibition, “Antisemitism 1919-1939,” and took lots of notes. It was the only way I could concentrate without becoming very upset.

First of all, as many of my readers know, my parents were genocide survivors. Secondly, the Nazi propaganda displayed in the vitrines felt eerily familiar in this 2016 election year. At first, Hitler was dismissed as a fringe crank. It didn’t take him long to become Chancellor.

So I’m weighing in on the “Trump Phenomena.” His campaign is not at all funny or entertaining. It’s terrifying. Like Hitler and his cohorts, he is a master of media manipulation and inflammatory, subliminal messages, nuanced enough to avoid accusations of “hate speech" yet remain within the realm of “free speech” protected by the First Amendment. It's incendiary nonetheless. Trump is the voice of bigotry and has given bigotry a voice. And if he now claims—cynically—that he’s just a regular guy and is going to calm down, that’s even worse. The damage has been done.

In Nazi Germany, Hitler had many “willing executioners,” as Harvard scholar Daniel Goldhagen wrote in a 1995 book of that title. Men and women who were acquiescent, men and women who obeyed. The Nazi killing machine revved up incrementally. It began by endlessly repeating words and images of dirty money-grabbing Jews who were “repulsive parasites,” the cause of all Germany’s problems since the beginning of time. There were even children’s books written to reinforce these messages and a couple of them are on display at the NY Historical Society exhibition. I had never seen them before. They are shocking.

The indoctrination of ordinary citizens ended in The Nuremberg Laws—the legal foundation of Hitler’s Holocaust—and the death camps. Where will Trump’s campaign lead us as a nation? His anti-immigrant and anti-Muslim epithets deny our citizens, asylees, refugees and applicants for American citizenship, the fundamental right to live without threat of violence. His language inflames those who hate, those who may carry guns; we are a well-armed nation. Hate crimes against Muslims have spiked in recent months. And no wonder.

We have had other demagogues running for office in the past, but that fact does not make Donald Trump any less dangerous. We must stop him for the sake of our children and our democracy.  Read More
Be the first to comment