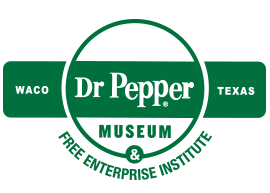 If you visit, you will get a free Dr. Pepper. The museum is not-for-profit, which made me smile.

I've been watching reruns of "Fixer Upper." I didn't intend to watch this program, nor did I know anything about it just a few months ago when I started working out at Ignite Gym in New Paltz. It's a small, friendly, well-run gym open just about all the time, which suits my unconventional teaching and writing schedule, and it is not owned by a chain, but by an entrepreneurial person, in The Great American Dream Story tradition.

There are four mega screens, all tuned to different stations, facing the work-out machines, and much to my suprise, I always choose the elliptical facing HGTV. Or maybe it is not really a suprise. I listen to music on the elliptical, I can't read, the televisions are silent, captions on, and no way do I want to watch CNN while I am trying to relax. Hyperkinetic breaking news all day long is not good for writers or, perhaps, for any of us.

So there they were, this absolutely adorable and gorgeous inter-ethnic, long- married couple, Chip and Joanna Gaines, chatting away about smashing walls, decorative decisions, room re-configurations, landscaping and children—all in their adopted hometown of Waco, Texas. Waco? Really? Back in 1916 there was a terrible lynching of a 16-year old boy, Jesse Washington, in Waco, still known as the "Waco Horror," and in 1993, federal agents raided the Branch Davidian compound. A shootout—lots of guns—tear gas, 75 Davidians (a Christian cult) and four agents dead, and "Waco" is still a rallying cry for Second Amendment alt-right groups. As elsewhere, the demographics of the town have changed, and on the centenary of the lynching, May 15, 2016, the mayor apologized in a ceremony to some of Jesse Washington's descendants. A historical marker is being erected. The KKK may still be lurking in the backwoods of Waco, but the local government seems to have achieved—enlightenment. Joanna and Chip Gaines have raised the profile of the town—they are megastars—wealthy beyond even their own imaginations. Apparently, they are also philanthropic. That is always good news.

As we well know by now, reality television stars segue easily into politics. The transition is smooth, to say the least. They have our attention, we adore them, we want to be them. (Well, usually.) Will Chip or Joanna, or one of their children run for public office? Am I inadvertently and unintentionally becoming one among thousands of this adorable couple's fan base? Because even though "Fixer Upper" has ended, this couple is not done; they are going to have their own TV station, they've opened a restaurant, published a cookbook.

Does it matter that this power couple attend an evangelical church? Does it matter to me? Yes, it does, especially as the Evangelicals lobby constantly to end Roe v. Wade, among other atrocities. Joanna is devout, which is her privilege, her right, but if she uses her wealth to end the right to choose, I will terminate my tenuous fandom. And I have some questions about those flipped fixer upper houses that the Gaines Empire is built on. Were they foreclosures? If so, what happened to the people who were forced out? Did they lose their jobs? Declare a medical bankruptcy? What are the Chip and Joanna's thoughts about Medicare for all, for example, now that they can well afford to feed, clothe, educate and entertain their own brood of five children?

These are the questions that are never answered on HGTV, or most of American TV, which exists to deliver us—the viewer—to the advertiser. Such questions threaten every chapter of The Great American Dream Story we all covet for ourselves, which is why the press is deemed "enemy" by the current resident of the Oval Office.