I was on a bike at the gym trying to ignore the horrific news on multiple TV screens and searching my New Yorker Today for a good article to read when I found one I’d missed on April 3, 2017 by Rachel Aviv, an outstanding reporter. It’s about the epidemic of comatose children in Sweden whose parents have not been granted asylum after many years of exile, adaptation to new surroundings, and years of waiting for an asylum application to be processed. The children of these families are analogous to our Dreamers; though most have not been born in Sweden, they have spent most of their childhoods in Sweden. Children being children, they learn a language quickly, make friends quickly, and soak up their host culture like sponges—the clothes, the music, sport fandom. More than 400 have fallen ill when asylym has been denied. They become sick for the family, they cannot move. “They fall away from the world,” one psychiatrist said. "They willingly die," said another.

Sweden had been the most beneficent country, taking in more refugees than any other European nation. This beneficence is an expression of the moral center of a humane, previously homogeneous society. But there had been a retrenchment, a right-wing surge, and more deportations if the country of origin was not at war. These deportations, Aviv explains, had become an “affront” to the country’s national character.

Even the Swedish king was alarmed, petitions were signed, the deportations eased, asylum was granted to the families of the comatose children and they began to recover as soon as they “heard” the news.

What can we learn from this astounding story? A great deal, I would say. Most importantly that it is our mandate as citizens to pay attention to the dangerous erosion of our moral center as a nation. Secondly, that we must continue to protest and give voice, as writers, as citizens, to those who are incarcerated and cannot speak. Thus my urgent message today, dear readers.

I find it telling the United States is not a party to the International Criminal Court founded in 2002 as a permanent international criminal court to "bring to justice the perpetrators of the worst crimes known to humankind – war crimes and crimes against humanity,” nor, more surprisingly, is it party to the UN Convention on the Rights of the Child (UNCRC). Indeed, the United States is the only United Nations member state that has signed but does not participate in the conventions all civilized—and even some uncivilized nations—have recognized as fundamental to the protection of the world’s children and world peace. And who can say that the United States is a civilized nation these days? I cannot.

And join me on June 30th wherever you are, in whatever country, city or state you reside to demonstrate against the horrific, inhumane actions of the current administration. Please vote in the primaries and get out the vote in November.

Support the Center for Human Rights and Constitutional Law:

and the American Civil Liberties Union: 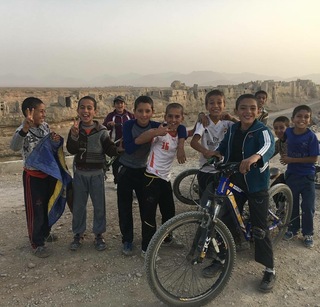 Photo: Soccer fans in Izad Khast, Fars, Iran. Courtesy of Ladan Akbarnia, Curator, Islamic Collections, British Museum, during a recent tour of Iran's historic sites.
I wish to say only this: let us dedicate this blog post and this day to the murdered cyclists on the West Side Highway of Manhattan. Let us put our arms around the terrified children, their teachers and caretakers, the pedestrians who witnessed the carnage, the brave men and women of the NYPD, FDNY and FBI. Let us think about our human frailty, our resilience and our resistance. Let us not stop listening to one another. Let us not build walls. Let us study colonial history intently and understand why a lunatic terrorist came to America if only to kill. This trouble we are in did not begin out of thin air. And though utterly irrational in many respects, it has a source, a reason. Let us begin there in our understanding and our effort to find solutions.

I offer you, dear reader, a photograph of beautiful, innocent children, soccer fans, far away from New York. If we could transport them to New York they, too, might have been victims of the terrorist’s truck. Indeed, children in many countries are living in war zones and desperate poverty. They are in grave danger. What are we, as adults, doing to protect them, to make the world a more peaceful and safer place?

These are very abstract thoughts for this writer, but I am weary this morning, and sad for the afflicted families. It took me two hours in a slowed down, partially locked down city, to get home yesterday, and when I arrived, and only then, did I find out what had happened. I was safe, all my friends and loved ones were safe, messages were flooding Facebook, a troubled sleep, some journaling, this blog post, and onward into a new day.

But not without some reflection. And, as a writer, not without some thoughtful words. What can we do, little by little, one small action at a time, to make the world a safer and more peaceful place?  Read More
1 Comments

Dear Carol,
This is a thoughtful and appropriate response, and I especially like your suggestion that we as Americans think about why some people might feel resentful towards us (or our governments). The revelations about the US role in Indonesia in the 1960s coups and the subsequent killings of many thousands of innocent people (that was disclosed in the recent declassification of JFK archives) comes sadly to mind... but there are so many more such actions around the world. Is the world safer for rampant capitalism?