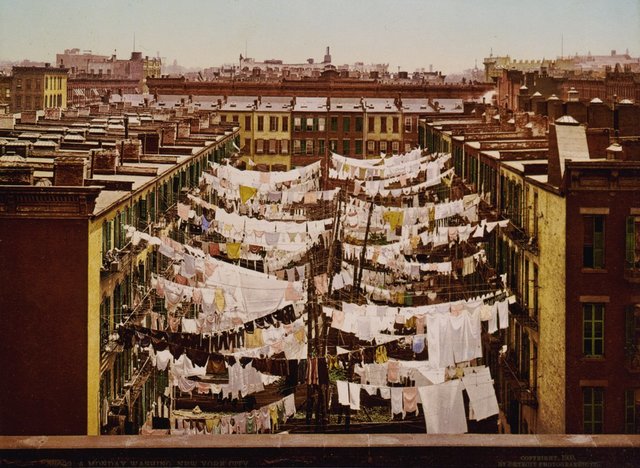 During the last two years the wealthiest 14 Americans saw their wealth increase by $157 billion. This is truly unbelievable. This $157 billion INCREASE in wealth among 14 individuals is more wealth that is owned, collectively, by 130 million Americans. This country does not survive morally, economically or politically when so few have so much, and so many have so little."

When I was a child, I never did my own laundry and my doctor mother never did our laundry, never mind my stepfather. No, we had maids to do the laundry. Once or twice I descended in the elevator to the basement of our well-appointed Manhattan apartment building to "help" do the laundry.  It was hot down there and the smell of sweat mingled with bleach was overwhelming. I was the only kid and it was weird, though at the time I felt more fascinated than weird. The maids were chattering to each other as they worked and they were laughing. Some were Black and some were white, some were Russian and some were from the Caribbean; it made no difference, they were maids. Yes, perhaps, in retrospect I understand that the white maids were more privileged, by virtue of being white, and their children probably had a better education and more opportunity than the children of the Black maids, but none of this made any difference to me because I was only in the basement as a voyeur, to be entertained. "I helped Lucille do the laundry," I told my mother. Which was not true, of course. I suppose I folded a towel or two, but mostly I just stood and gaped. These people were so different from anything I had experienced in my day to day life. They seemed happy, somehow. Or connected. Yes, in retrospect, that was the energy: shared labor, a feeling of connectedness, one I envied, and still do today, though even that observation feels condescending. If there was grievance, I would not have decoded a grievance; I did not have the education, as yet, or the tools.

In other words, most of my life I have owned thoroughbred horses, metaphorically speaking, but now I am riding on a donkey. (I thank Orhan Pamuk, another privileged writer, albeit Turkish, for  that image.) Not only am I maid-less these days, I don't have a washer and dryer in my new gorgeous apartment.  I take my laundry to one of three local laundromats where I mingle with what my class-caste-conscious European parents would call the hoi polloi. And let me tell you, Dear Reader, it is illuminating and humbling.

Fortunately, I'm a curious journalist and I have an open, friendly face, I have been told, so people tell me stories, ask me questions about this and that, and complain. I am empathetic, but always at an emotional distance. Even today, as I write, I set myself apart and above. If someone at the laundromat talks to me, I am interested, but also wary. I think to myself, if only one or two of my rich friends could see this, then they would understand what the politicians mean when they refer to "The Great Divide."

My encounter this week was typical: I was shoving my clothes into a machine when a white  woman with blonde frizzy hair started to talk to me. She hadn't realized that $10 is charged to the credit card even though the machine costs $4.75.  Eventually, the excess money is refunded, but not right away. "I now have zero balance in my bank account," she said. "I'm wiped out."

Was she asking for money? Was this a scam? Was she a professional grifter? Had she targeted me? No way to know and not important to this story. It was my own hesitation, more than her demanding presence that upset me. I shook my head, commiserated, and finished loading up the machine. By the time I had decided to retrieve some of my stashed meter quarters from my car to give to her, she was gone.

Then. as I was stuffing my bag with dry laundry, I saw her again. She was steps away doing the same, and my goodness did she have a load of laundry.

"I'm going to get my kids to fold this when I get home. I've had enough of this place," she said, in the same exasperated voice she'd had when she first approached me.

Nothing in the past half hour or so had alleviated her distress.

"How many kids do you have?" I asked, patiently.

"Three. And my mother has dementia, she's in Florida, and I have to get down there to take care of her.  I'm fifty-eight and I feel like I'm seventy. What about you?"

"One kid, no mom any more, just me and my husband, small load. He's usually with me to help but is working today."

I didn't mention my age. She looked older than her years, older than me.

We started to laugh about my husband usually being with me. It was also the contrast between us, the serendipity of our meeting that amused and drew us together into an instant pod: mothers, wives, children. The domestic work that has to get done, the domestic work that in poor families is still relegated to the over-worked, exhausted, overwhelmed trying-to make-ends-meet women in this town, and everywhere.